Real Madrid staged a staggering comeback in the second leg of their Round-of-16 second-leg clash against Paris Saint-Germain last week in the UEFA Champions League. Los Blancos won the game 3-1 and sealed the tie 3-2 on aggregate to book their place in the quarter-finals of the European competition.

Real Madrid started on a positive note at the Santiago Bernabeu, trying to make an early statement. PSG, meanwhile, grew confident as the game progressed and came close to opening the scoring through Kylian Mbappe. But Thibaut Courtois made a great save to deny the visitors. However, the French giants finally broke the deadlock through Mbappe, who slotted home after receiving a great through ball from Neymar in the 39th minute.

In the second half, Real Madrid came out with all guns blazing. In the 61st minute, Karim Benzema forced PSG goalkeeper Gianluigi Donnarumma into a blunder, which he took advantage of to make it 1-1 on the night. After some excellent work by Luka Modric, Benzema scored Madrid’s second goal in the 76th minute. Just two minutes later, the Frenchman made it 3-1 by capitalizing on a Marquinhos error to bury one into the bottom corner. 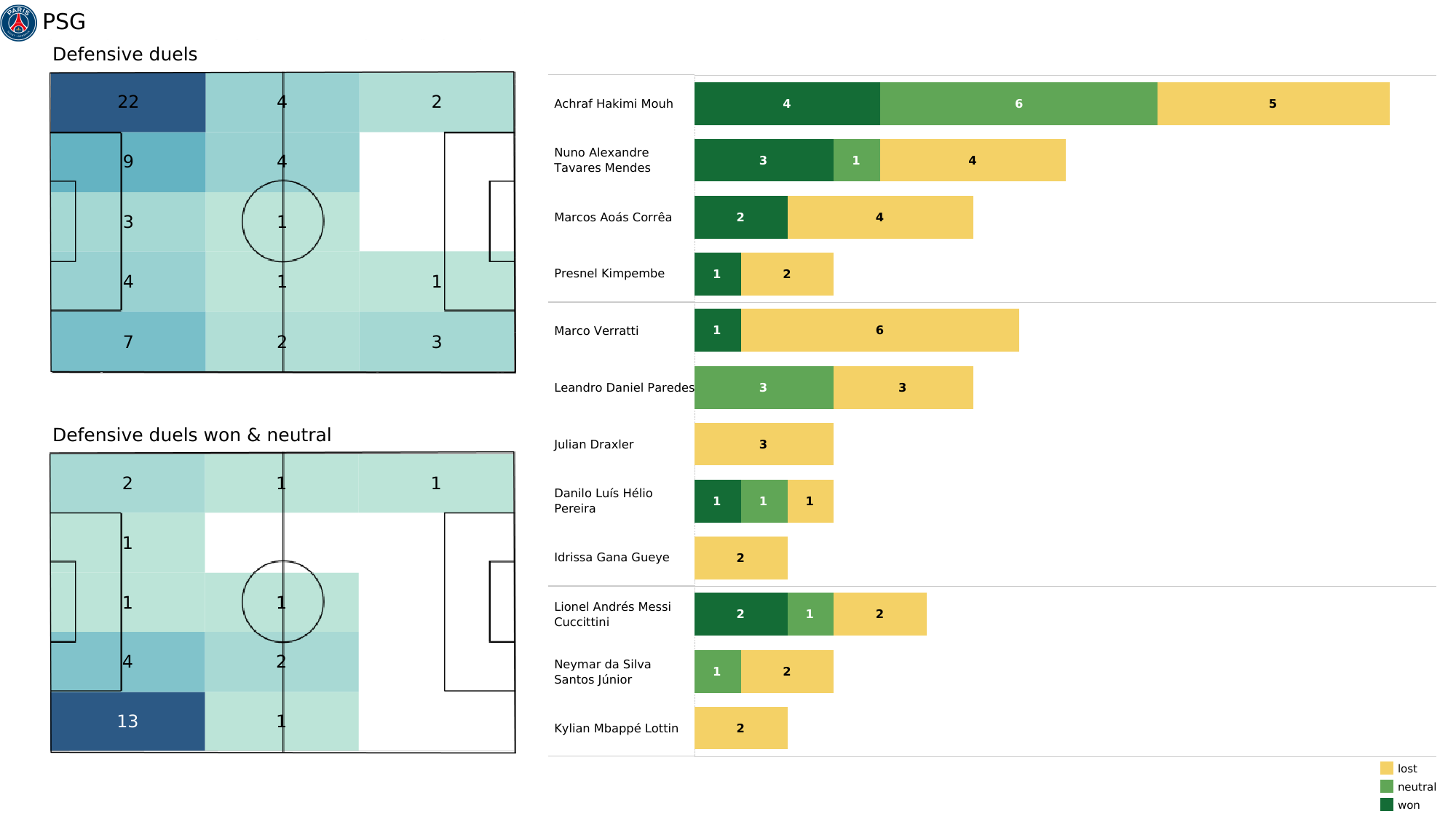 Real Madrid completely outplayed PSG’s defense line of Achraf Hakimi, Presnel Kimpembe, Marquinhos, and Nuno Mendes. The above visuals show us that PSG attempted 63 defensive duels and won only 14 duels, in which they were able to recover possession of the ball. As seen in the visual, PSG’s defenders failed to win possession of the ball from the duels they attempted and failed to stop the opposition attacks. Achraf Hakimi couldn’t keep away Vinicius Jr. on the right flank as the Brazillian got into great positions and was a constant threat to them. The opposition defenders were completely rattled by Real Madrid’s offensive line. In addition, Donnarumma made a big error by failing to clear the ball when he had time to do so, allowing Real Madrid to equalize. 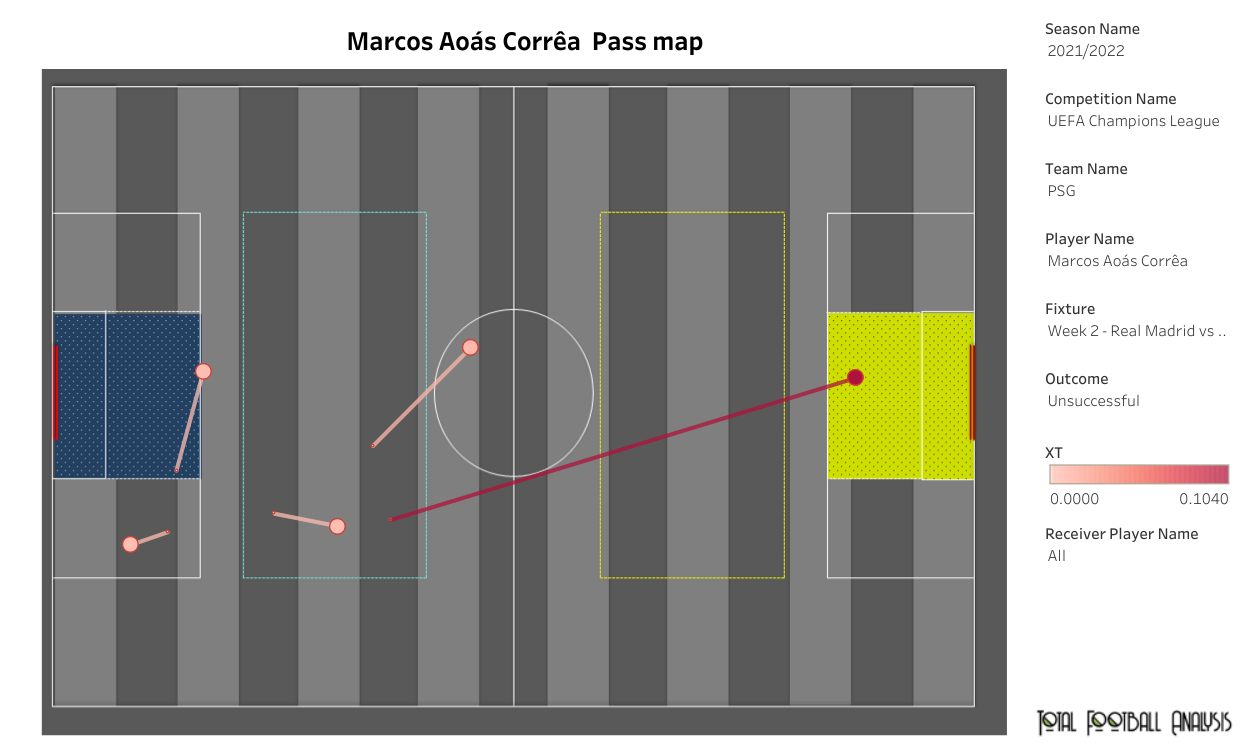 Marquinhos had very little to do in the first leg as Real Madrid did not get many chances to attack the PSG defense. But in the second leg, when Real Madrid put more pressure on their defenders, Marquinhos was unable to keep hold of the ball and lost possession multiple times. The Brazilian was also responsible for Real Madrid’s third goal, which was scored by Benzema. Marquinhos is usually the leader of the team, who motivates them to push harder. But PSG lacked leadership in this game and had no one who could take charge of the situation. 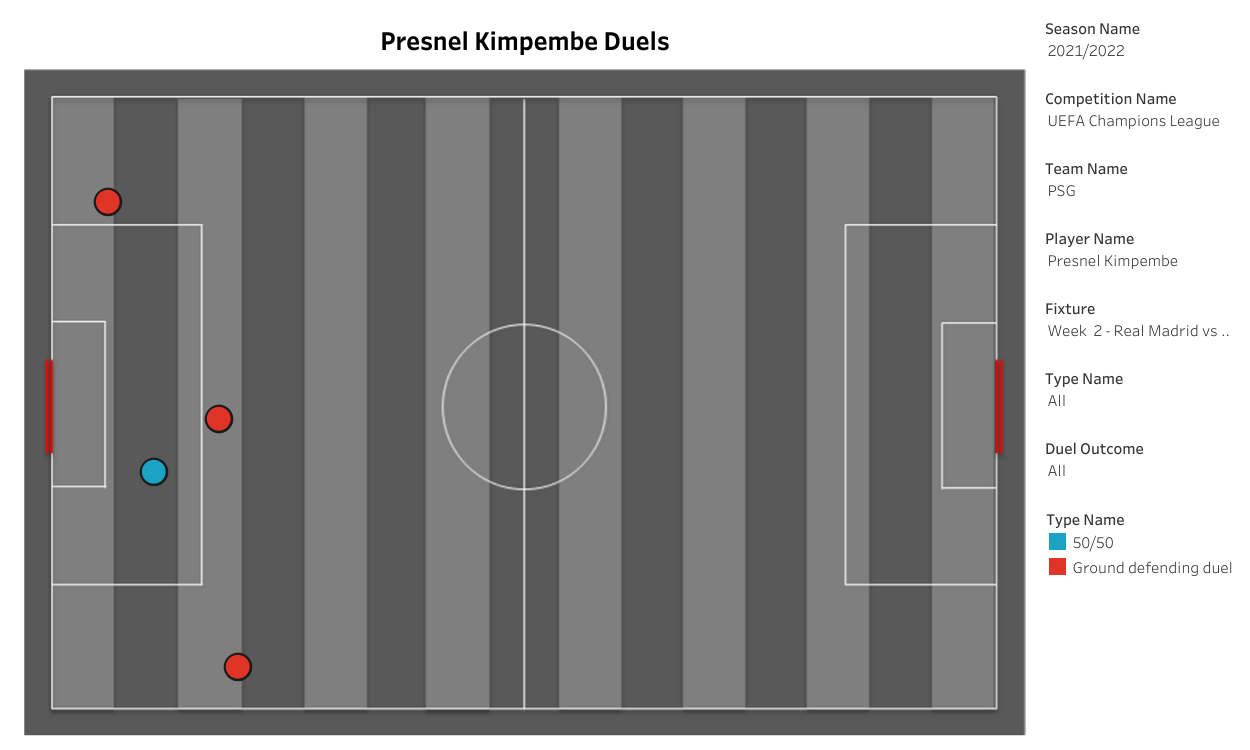 PSG centre-back, Presnel Kimpembe, was solid as ever in the first half but looked clueless in the second half. His performance got shakier with each passing minute in the second half, and he was nowhere to be found during Benzema’s glorious 17-minute spell. Kimpembe only attempted four duels in the game and lost both the 50-50 duels he competed for.

Paris Saint-Germain’s unfortunate spell in the UEFA Champions League continues as they are still in search of a Champions League title. PSG can now focus on the domestic league as they have a 15-point lead in the Ligue 1 and are the favorites to win the league title.