Paris Saint-Germain will visit the Santiago Bernabeu to face Real Madrid in the second leg of their Champions League last-16 tie on Wednesday night, looking to take advantage of their 1-0 lead from the first leg at the Parc des Princes. A Kylian Mbappe strike in the dying moments was all that stood between the two sides in Paris.

PSG won the first leg in a close game at home, but they have only one win in three Ligue 1 games since. In the absence of Kylian Mbappe, they put up a weak performance against Nice, losing 0-1 away. Kylian Mbappe is still a doubt for Wednesday’s clash and will face a late fitness test. 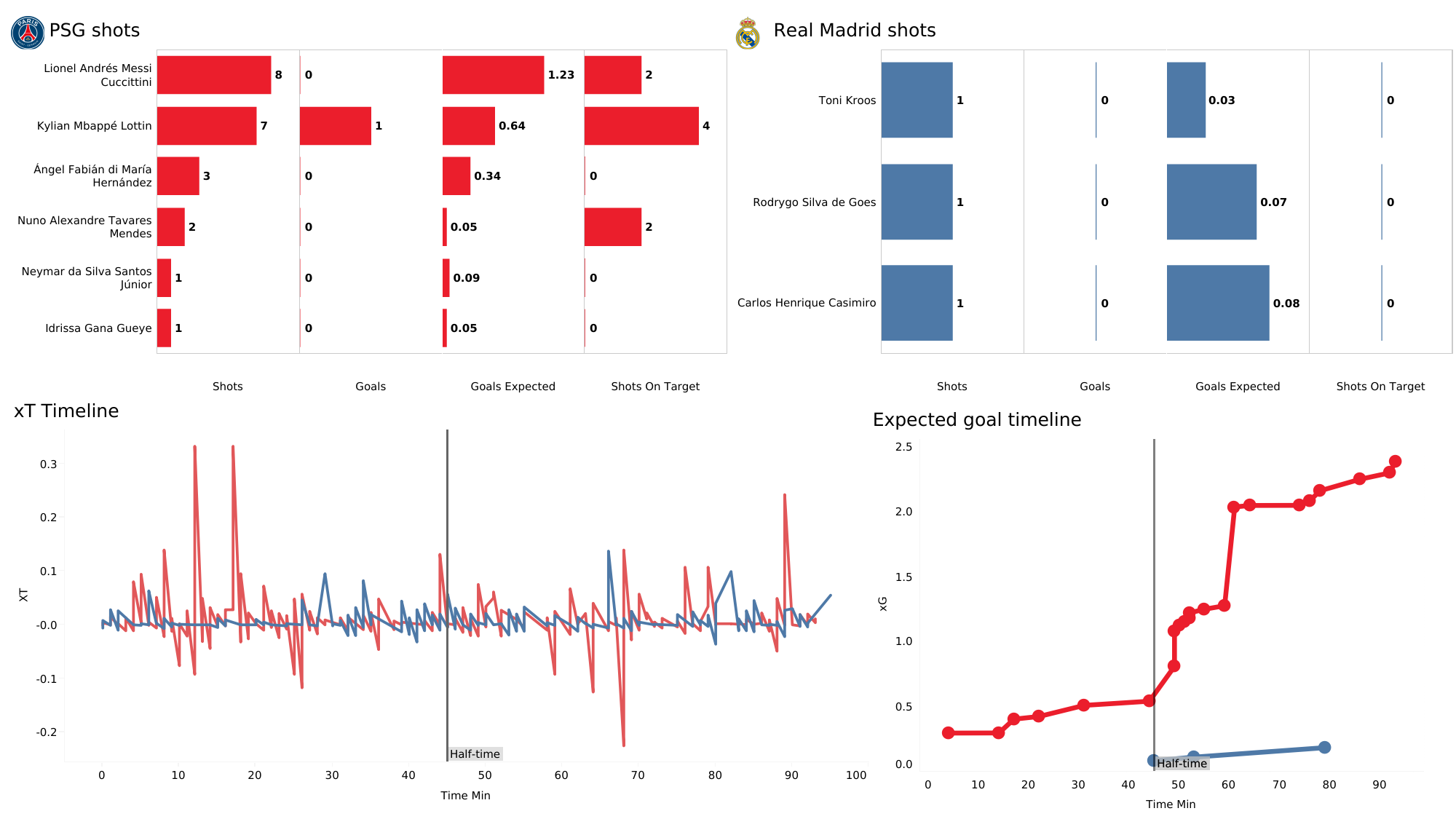 Paris Saint-Germain were on the front foot in the first leg as they created several chances in the final third, but it was Thibaut Courtois who denied most of their efforts. PSG did find a way through in the last minute and edged past the Los Blancos. The xT and xG timelines indicate how PSG were the more dominating side in the game with 22 attempts on goal. Lionel Messi had eight attempts on goal with two on target while generating an xG of 1.23. 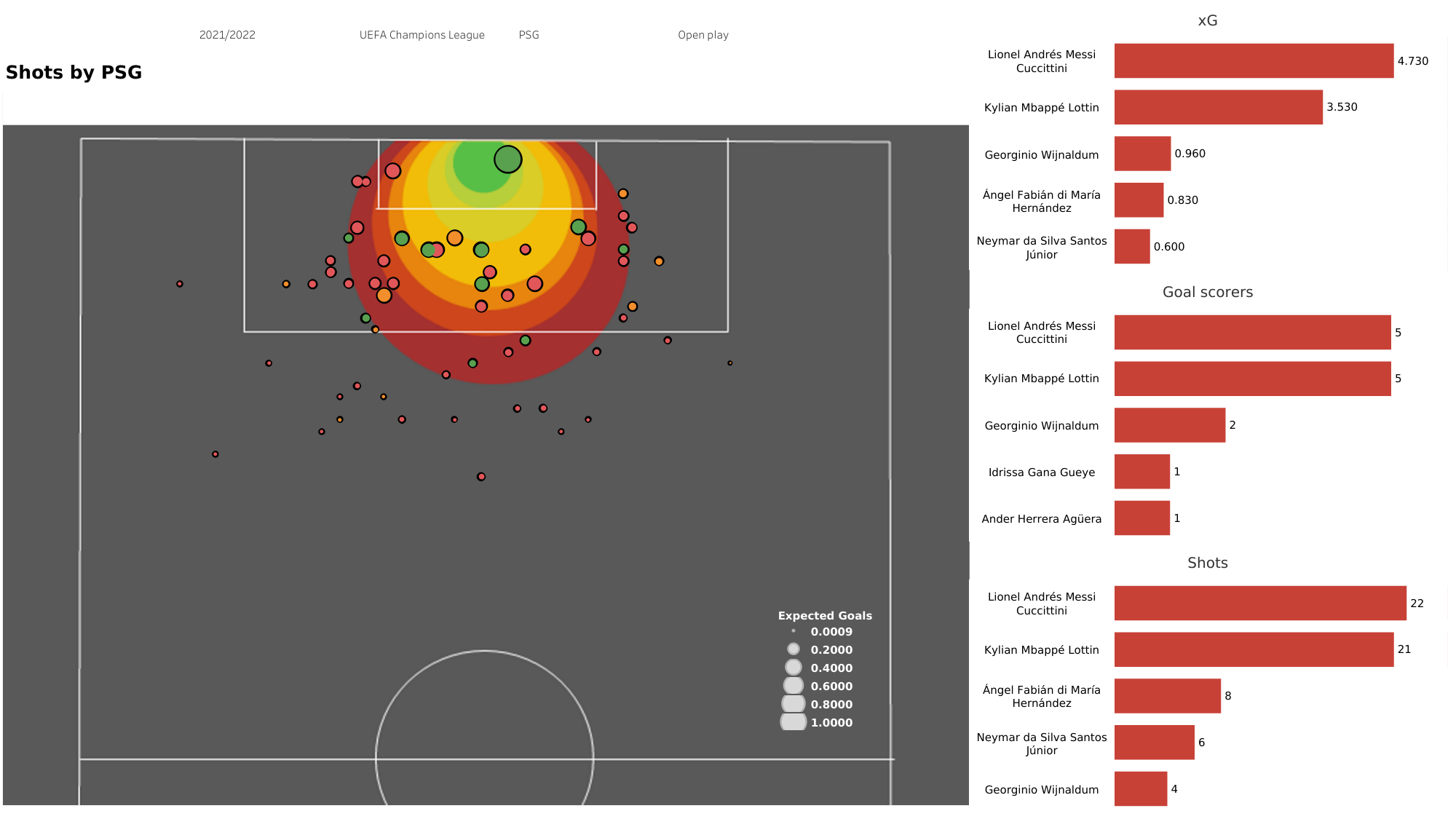 The above visual shows us the shot map for PSG. The visitors have 76 shots on goal and have been able to keep 35 shots on target. Messi has generated the highest xG for PSG from his 22 shots on goal. He has scored five goals in the tournament so far.

Los Blancos have won three league games in a row, with Karim Benzema in great form, scoring three goals and providing one assist. Their last two home games ended in 3-0 and 4-1 victories, so they will be trying to make a comeback and win on aggregate. The hosts have lost just once at home this season, while four of the five losses for the Parisians have come in their travels. Madrid’s home advantage will also play a role in the outcome of the game. 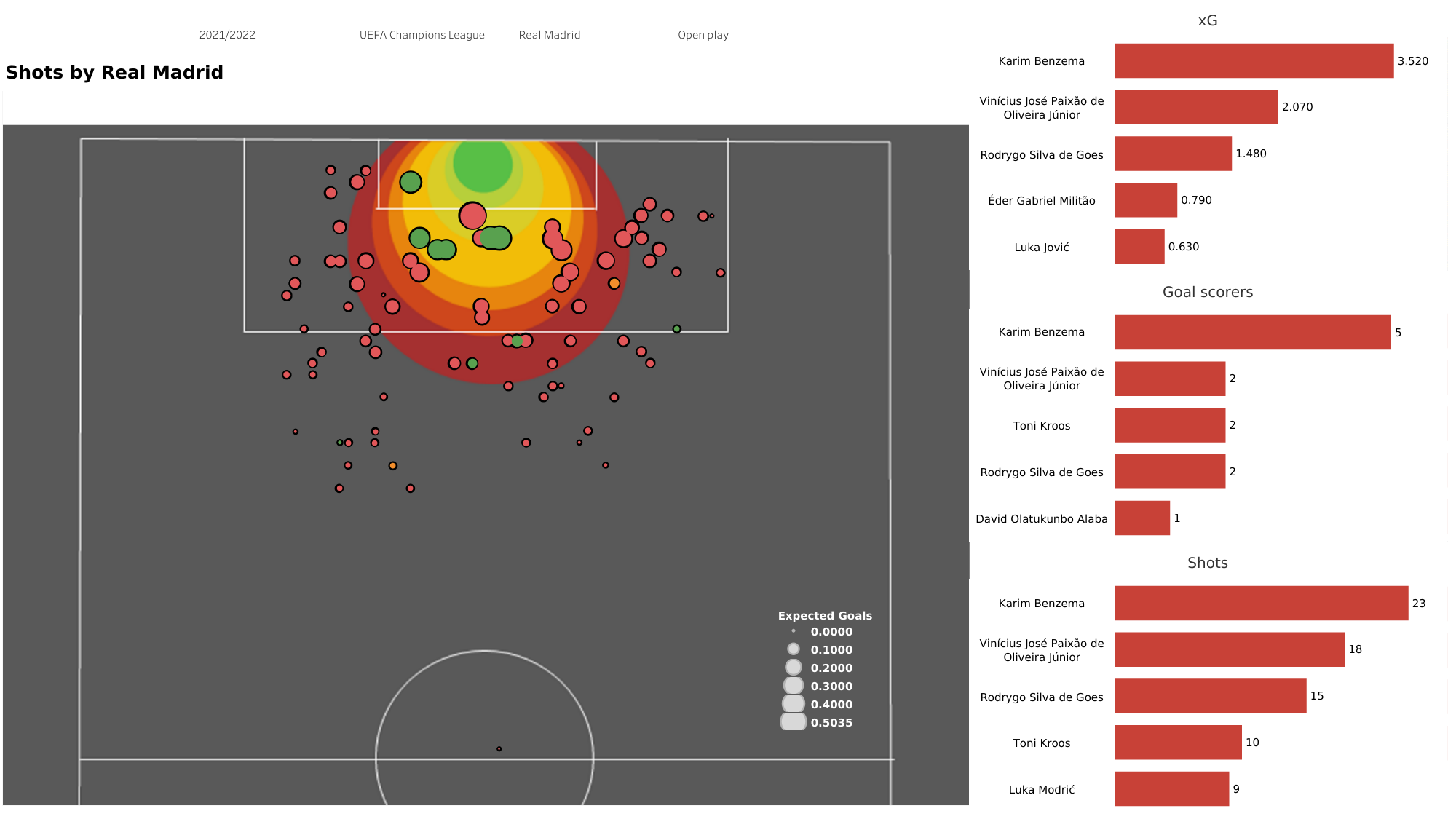 Real Madrid have 113 shots on goal and have managed to keep 43 on target. They have a high number of shots near the six-yard box and have generated the highest xG from these shots. Karim Benzema has generated an xG of 3.520 with his 23 shots on goal, scoring five goals so far.

Real Madrid have a couple of absentees for the game in Casemiro and left-back Ferland Mendy. PSG had an injury scare earlier this week as Mbappe picked up a knock in training, but it seems he will be able to start here.

Paris Saint-Germain will try to continue the momentum they gained in the first leg and will try to push Real Madrid back with their attacking trio of Mbappe, Neymar, and Messi. They have a great chance to score an early goal, which makes it an uphill task for Madrid to come back to turn a two-goal deficit.