Sergio Ramos joined Paris Saint Germain on a free transfer from Real Madrid in July 2021 and there were huge expectations from the veteran. However, just one season on from the transfer, things have not quite worked out for both parties. The veteran played only 801 minutes for PSG in Ligue 1 and not even a single minute in the UEFA Champions League campaign. There are already reports which say that PSG are willing to ditch the 36-year-old centre-back. If that is the case, the French champions will need to bring in a younger replacement. That could be in the form of Arsenal centre-back, Gabriel Magalhaes. Here, we will dissect Gabriel’s season at the Emirates Stadium. 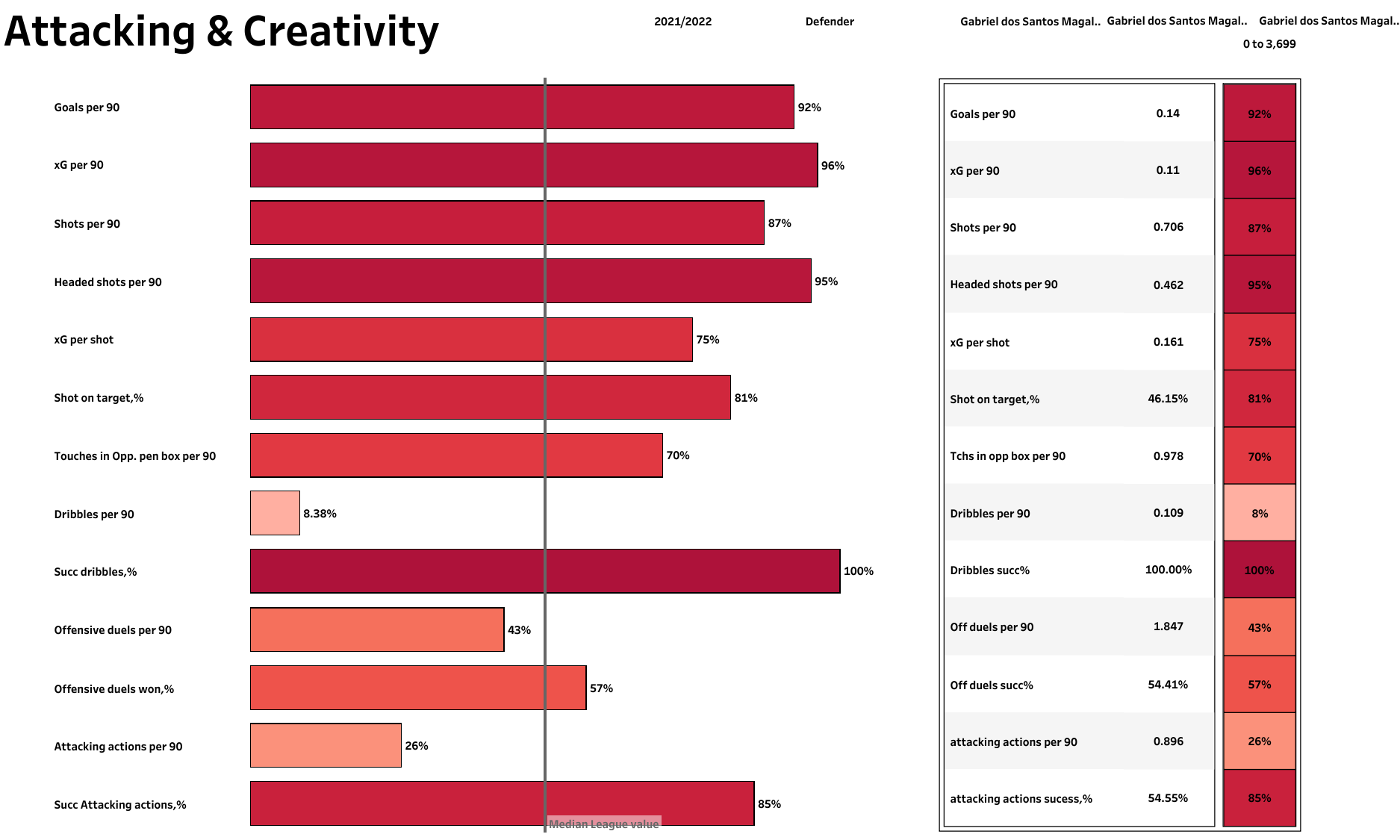 Magalhaes made 35 league appearances for Arsenal in the 2021-22 Premier League season. The Brazilian was one of the highest scoring defenders in the league, netting five goals. He even managed to outperform his xG of 0.11 per 90 by scoring 0.14 goals per 90. Gabriel attempted 0.7 shots per 9, putting him in the upper quintile for this category among defenders. With a height of 190 cm, more than half of his shots were headed shots, and he hit 46.15% of his shots on target, ranking him in the top quintile for this category as well. 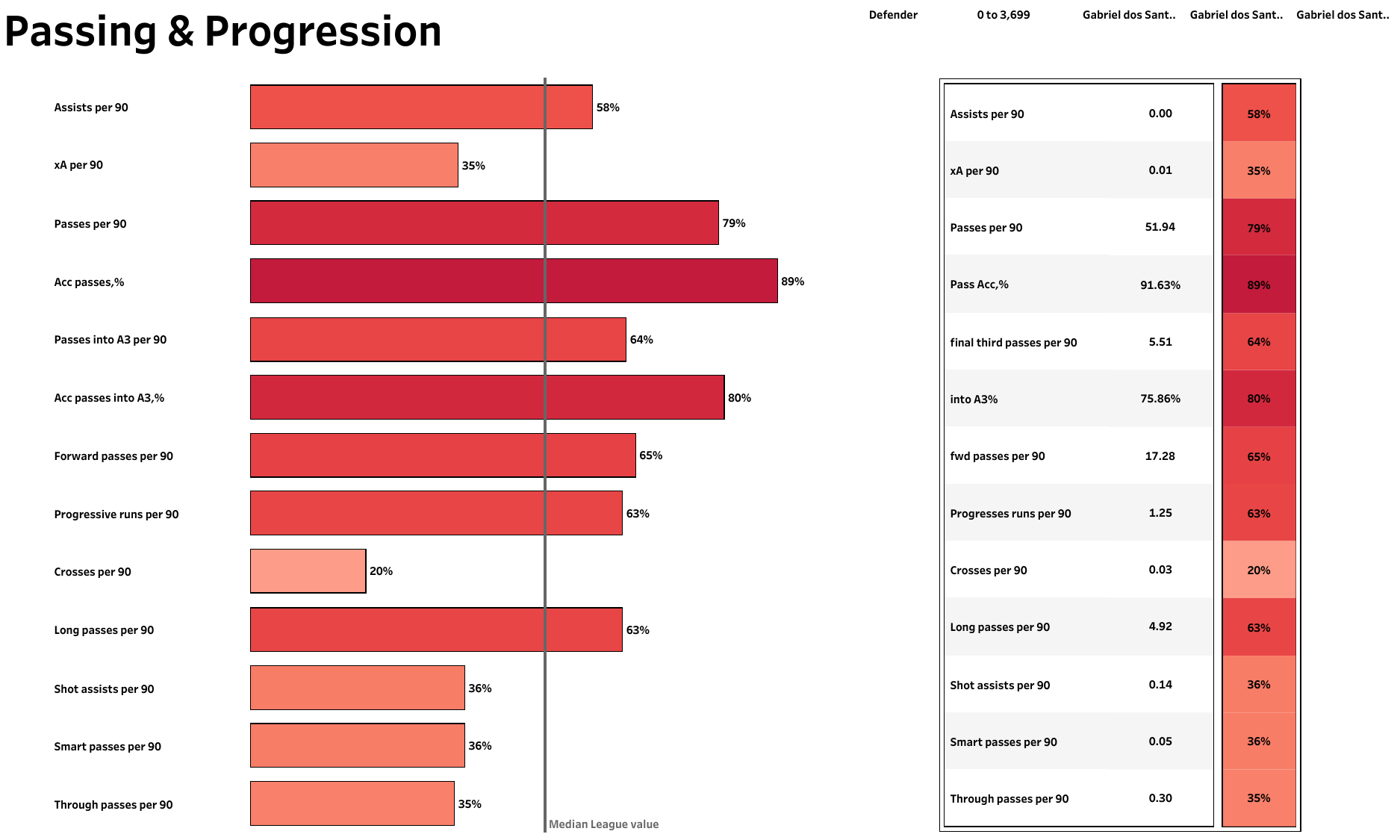 Magalhaes attempted just under 52 passes per 90 at an astonishing accuracy of 91.63%, the latter of which puts him in the top 11%. With numbers like these, one can say that the 24-year-old is reliable in his passing and does not easily give the ball away in dangerous areas. The Brazilian also attempted a shade over five and a half passes into the final third per 90, and he found his teammate on over three-fourths of the occasions. 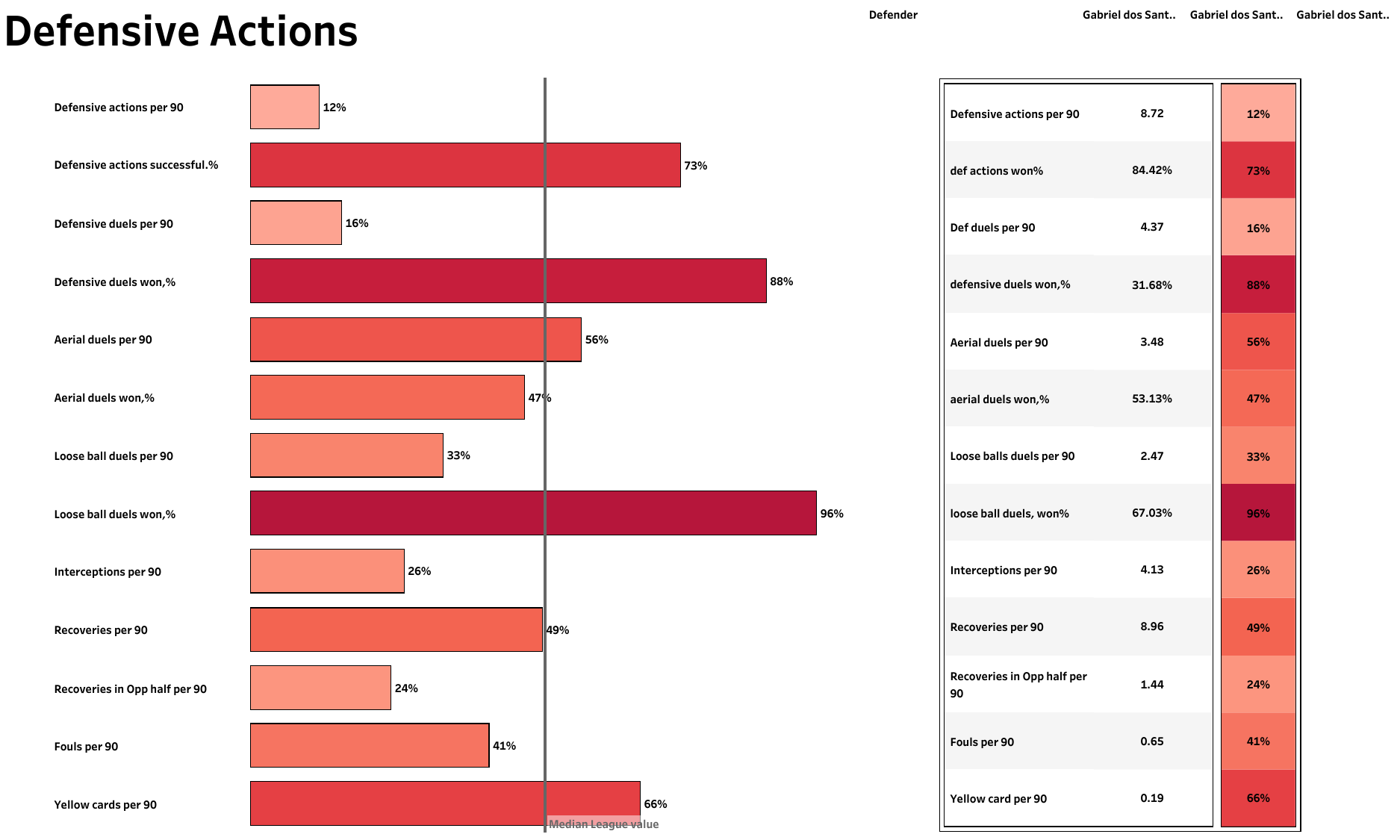 Magalhaes attempted less than nine defensive actions per 90 and less than 4.5 defensive duels per 90, putting him in the bottom quintile for both categories. However, his win rate of 84.42% for defensive actions and 31.68% for defensive duels ranks him in the 73rd percentile and 88th percentile, respectively. It is a similar trend in loose ball duels as he attempted only 2.47 per 90 (ranked bottom third) but came out successful 67.03% of the time (top 4%). 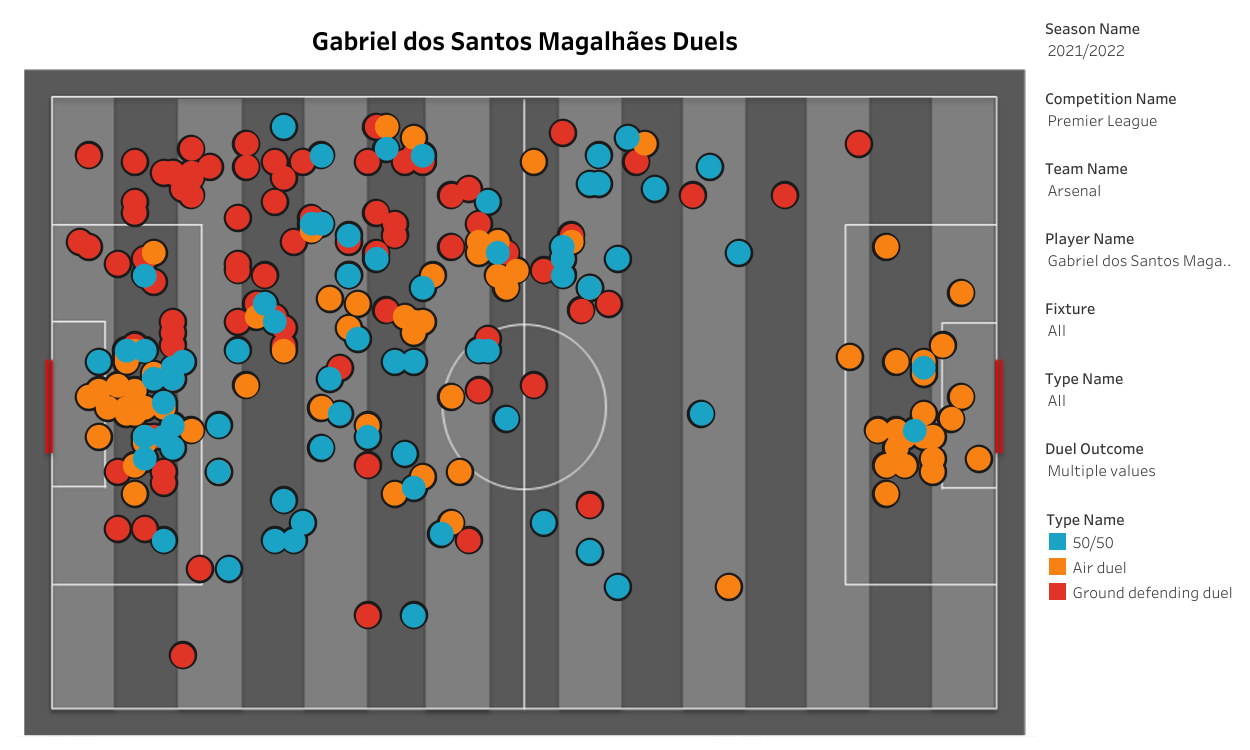 As shown in the image above, Magalhaes won most of his duels inside his third and quite a few of them inside his penalty box. He won 50/50s, aerial duels as well as ground duels. Defensively, this season, the Brazilian attempted 6.53 pressures per 90, 2.82 tackles and interceptions per 90, 3.44 clearances per 90 and 1.44 blocks per 90. 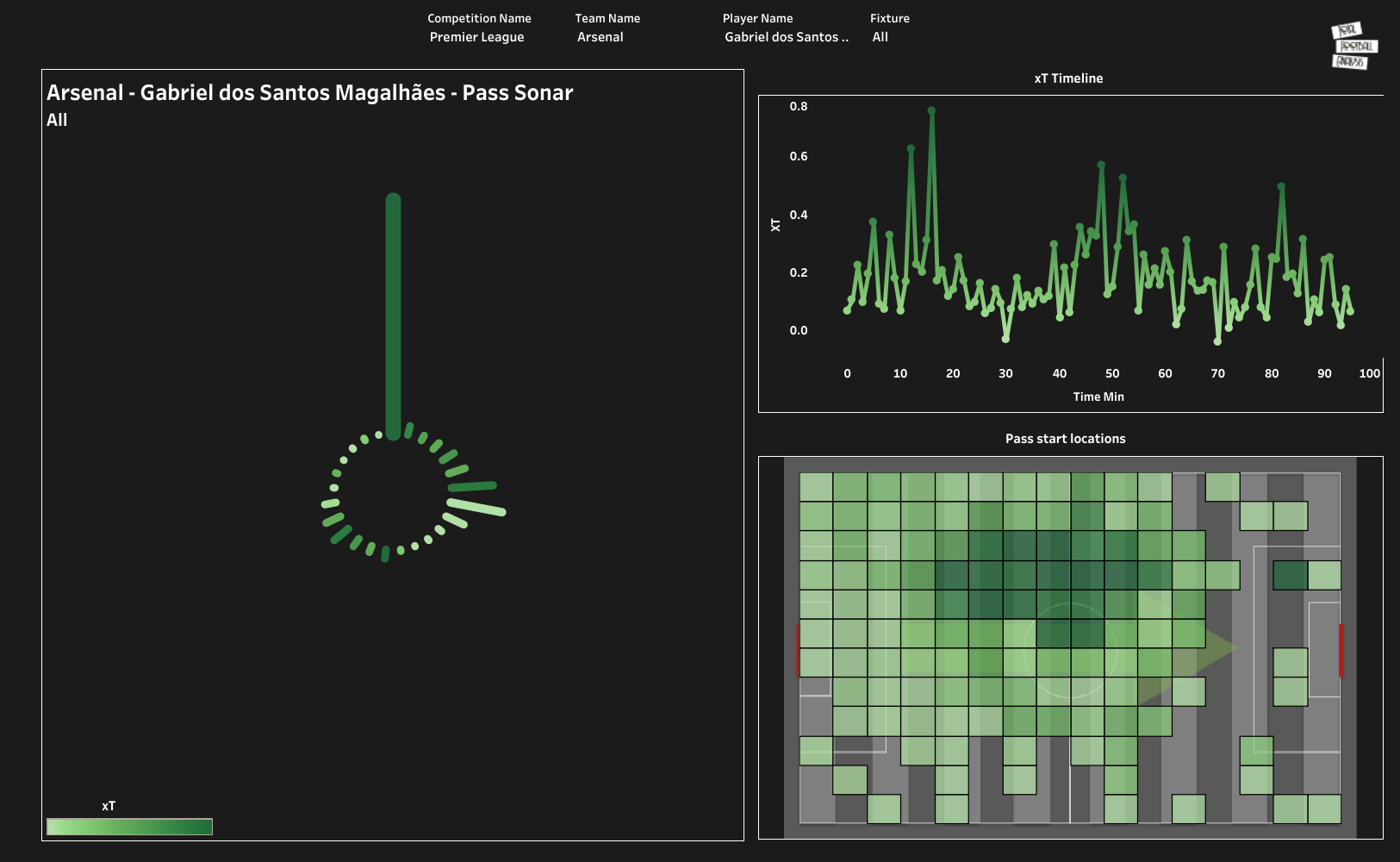 Gabriel Magalhaes frequently generated an xT score of 0.4 for Arsenal in the Premier League season just gone by. With the ball at his feet, Gabriel completed 2.44 progressive passes per 90, 3.26 passes into the final third per 90 and 4.24 progressive carries per 90.

Gabriel Magalhaes enjoyed a productive campaign at Arsenal under Mikel Arteta. However, being a key defender of the Gunners squad, Arteta won’t let him go easily, and PSG may have to pay over the odds if they are to acquire the Brazilian’s services.