For a long time now, Paris Saint Germain have had midfielders who have just not been of the required calibre to compete in the latter stages of the Champions League (with the exception of Marco Verratti). Their current crop of midfielders includes Danilo Pereira, Georginio Wijnaldum, Ander Herrera and Idrissa Gueye, all of whom are aged 30 or above. If the French champions are to perform on the European stage, they will need someone younger and more dynamic players in the centre of the park. One such option is the Leicester City and Nigeria midfielder, Wilfred Ndidi. In this article, let us take a look at what the Nigerian man could bring to the midfield of PSG. 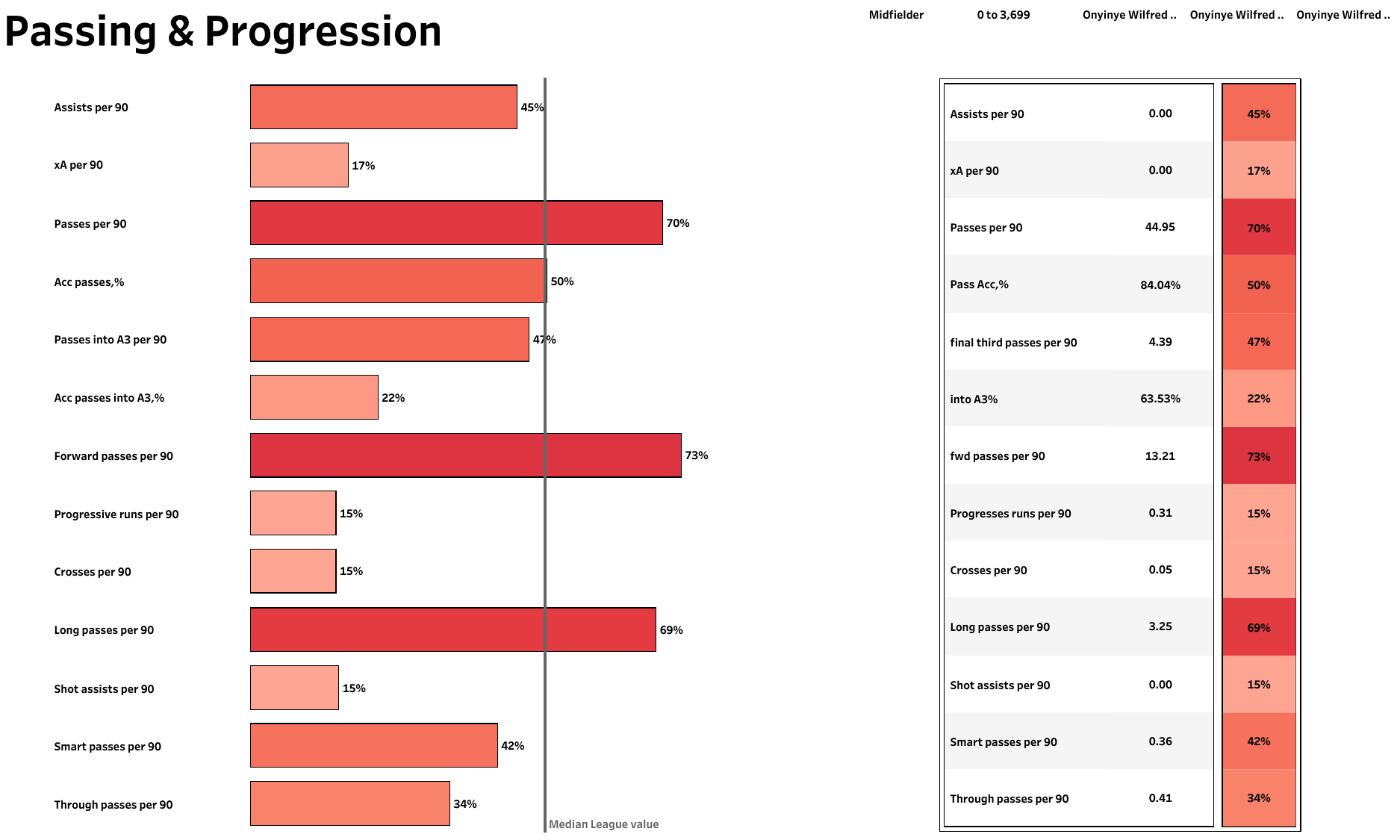 Ndidi has played 19 games for Leicester City in the Premier League this season for 1618 minutes, as he missed the last two months of the season due to a knee injury. He has attempted an average of 45 passes per 90. His pass accuracy of 84% is below the very best of defensive midfielders. However, he plays for a Leicester City team which ceded possession against the big teams throughout the season. One can expect this passing accuracy to increase with PSG in Ligue 1. His pass accuracy into the final third is at 63.53%, which is in the bottom quartile for midfielders. Once again, one can expect the number to rise in Ligue 1. 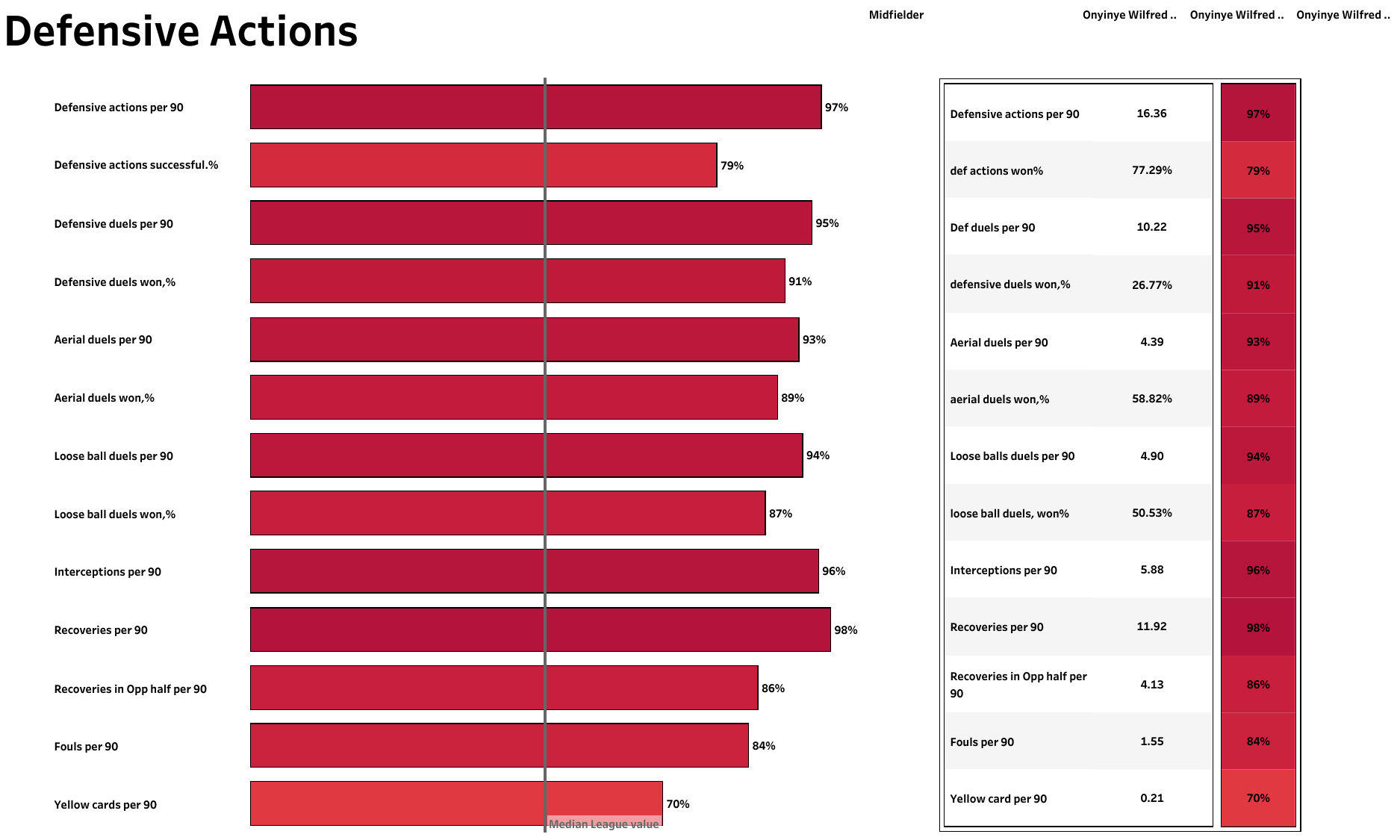 But while Ndidi’s passing numbers look below average, his defensive abilities were never in doubt. The Nigerian has attempted 16.36 defensive actions per game, which ranks him in the top 3% of midfielders. He has come out successful in more than three-fourths of them. Ndidi has also attempted 10.22 defensive duels per 90, 4.39 aerial duels per 90 and 4.9 loose ball duels per 90, and the success rates in these categories rank him in the 91st percentile (26.77% in defensive duels), 89th percentile (58.82% in aerial duels) and 87th percentile (50.53% in loose ball duels), respectively. The 25-year-old Nigerian midfielder has also made 5.88 interceptions per 90 and 11.92 recoveries per 90, ranking him in the top 4% and top 2%, respectively, in these categories. 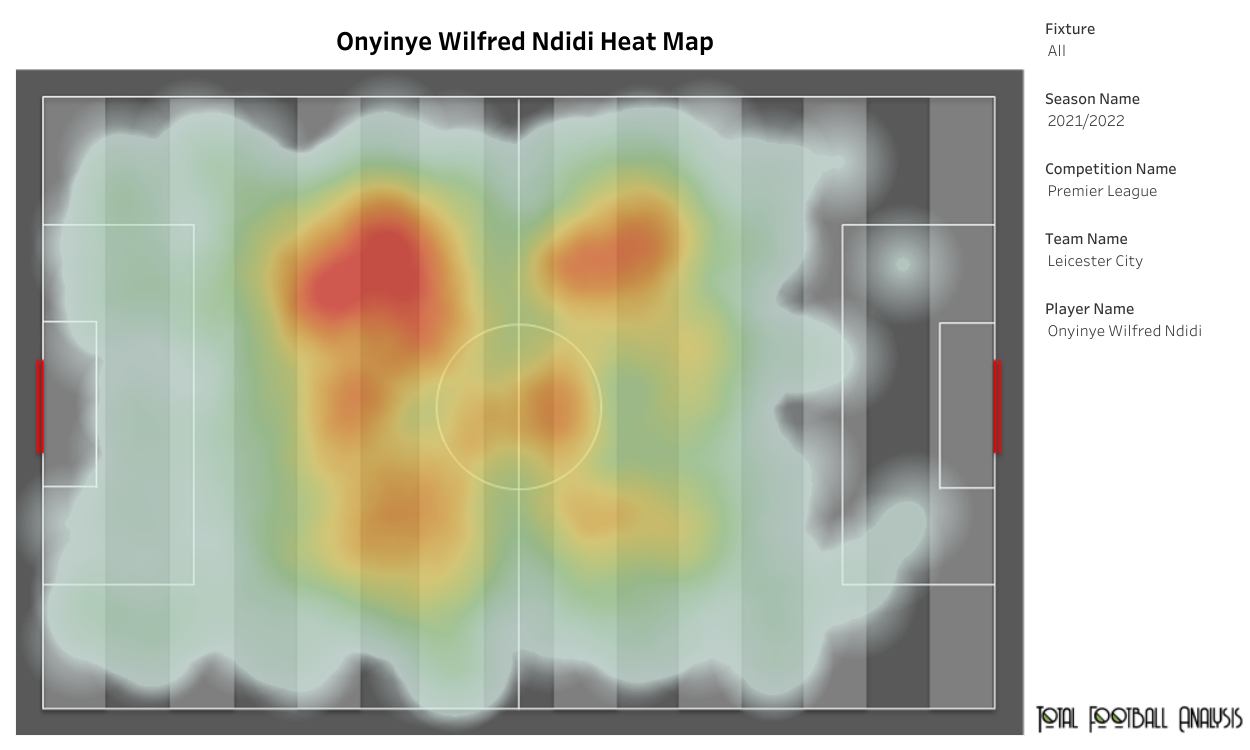 As shown in the above heat map, Ndidi has been the main man in midfield, shielding the defence behind him and stopping counterattacks from opponents whenever needed. Defensively, the 25-year-old midfielder has made 22.8 pressures per 90, 6.39 tackles and interceptions per 90, 3.83 clearances per 90 and 1.78 blocks per 90 whenever he has played. Going forward, he has made only 2.89 progressive passes per 90 and 2.06 passes into the final third per 90.

Wilfred Ndidi’s performances show that he would be better than any midfielder at PSG, barring Verratti. One could imagine Ndidi winning the ball and Verratti pulling the strings in midfield for PSG. However, it would be difficult to prize him out from Leicester City, as the French Champions would face competition for his services from Manchester United, who are also in desperate need of a defensive midfielder.