With a few days remaining until the January transfer window closes, Tottenham Hotspur and Paris Saint-Germain remain in talks over the possible transfer of midfielder Tanguy Ndombele. Antonio Conte’s arrival at Tottenham Hotspur has done little to improve Tanguy Ndombele’s form, and the Italian coach has all but given up on the French midfielder, leaving PSG with a clear path to completing his transfer. Mauricio Pochettino signed the former Lyon playmaker for Spurs but was dismissed the following season, although a reunion is now quite likely. Pochettino wants to strengthen his amount of control over a star-studded squad thus, he’s trying to strengthen his lineup.

Pochettino wants Ndombele to add balance to his midfield, as defensive transitions have been a major issue at the Parc des Princes this season. Gini Wijnaldum’s arrival was supposed to alleviate such an issue, but the Dutch international has found it difficult to adapt to football under the Argentine. Ndombele is a quick, powerful, and versatile player, and generally plays as a box-to-box midfielder but can also play in various other positions like an attacking midfielder or a defensive midfielder. He is known for his dribbling ability, body balance, and passing ability. 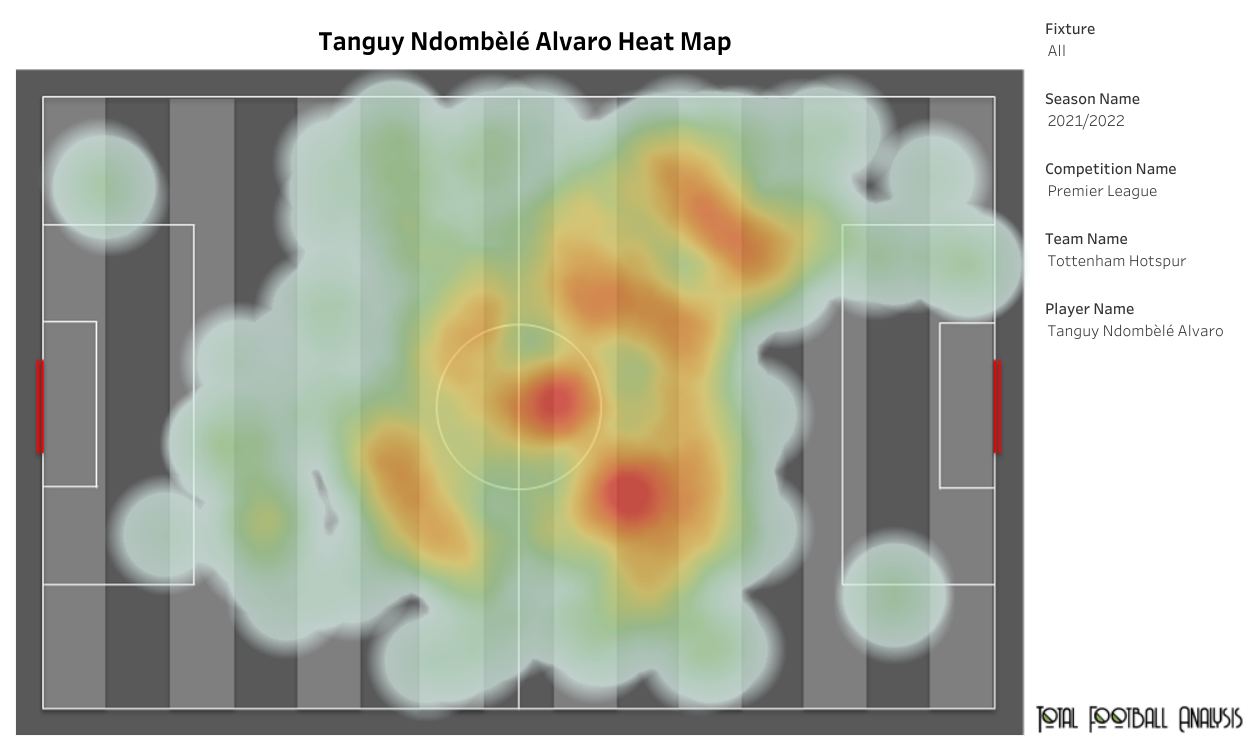 The above visual shows us the heatmap for Ndombele from the Premier League 2021-22 season. The midfielder has only made nine appearances for the Spurs in this season as he has fallen out of favor under his new manager. He has featured in different positions under different roles in several games, as his heatmap suggests. He is naturally an attacking midfielder but has been used as a defensive midfielder at times whenever required. 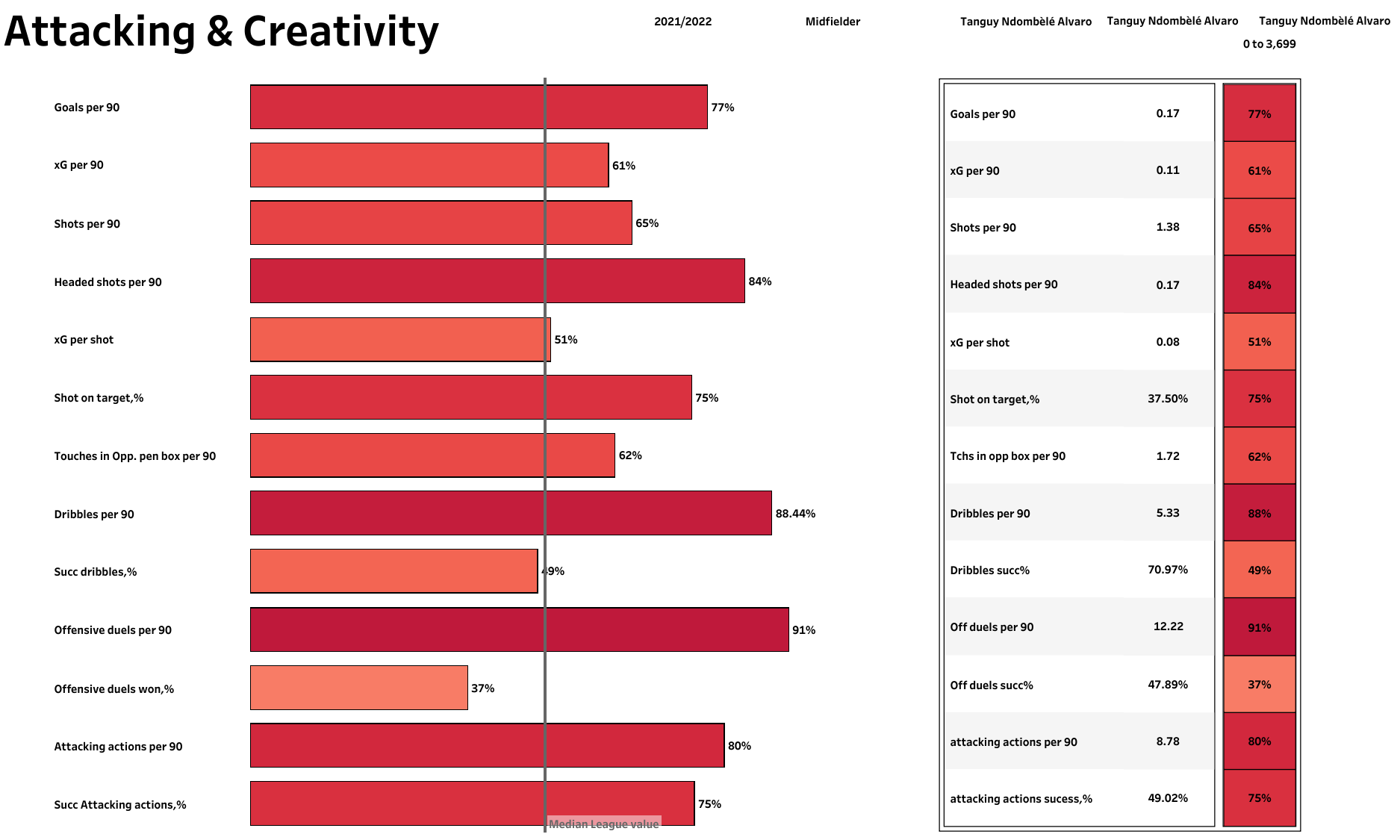 The attacking and creativity stats for Ndombele are not that impressive, as the midfielder hasn’t got many chances this season to prove himself. He has attempted 8.78 attacking actions per 90 minutes and has been able to win 49.02% of these actions. He has attempted 5.33 dribbles per 90 minutes, which is very impressive for a midfielder. Even more impressive is that his dribble success rate is at 71%. Even if he doesn’t beat a player, he can draw fouls thanks to his quick feet and strong physique, which allows him to manipulate his body to shield the ball. 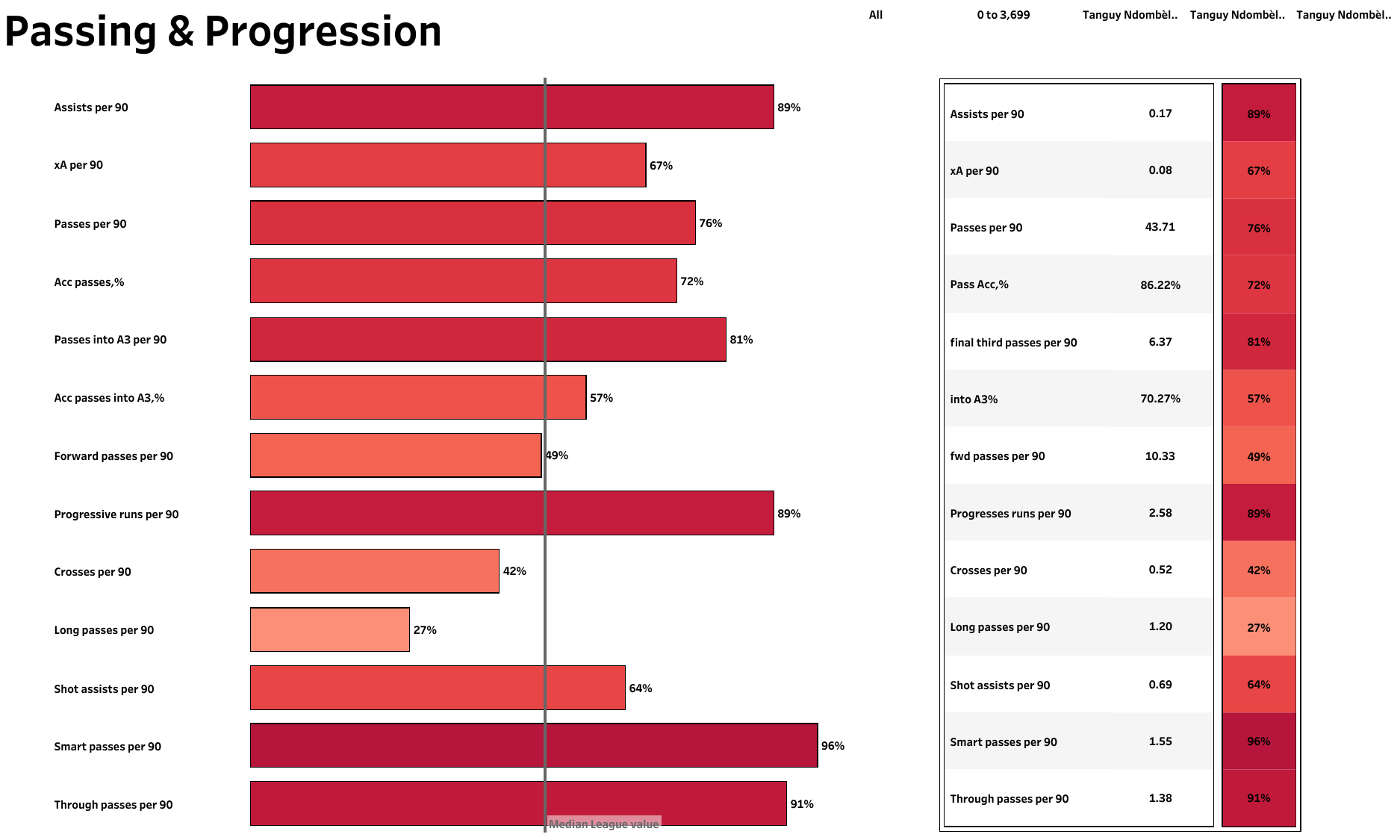 The passing metrics of Ndombele indicate that he is always trying to look for a progressive pass behind the opposition defense. He is ranked highly for the number of smart and through passes played per 90 minutes. Ndombele has attempted 43.71 passes per 90 minutes with an accuracy of 86.22%. This pass accuracy rate is very high, considering he plays more as an attacking midfielder and most of his passes are in the final third of the pitch. He has also made 2.58 progressive runs on average and has been ranked better than 89% of the midfielders in the league. When Ndombele receives the ball, he uses his skills to beat the opposing defender. To go past a player, he can use step-overs, but his most effective move is the body feint. His ability to mislead opposing midfielders is brilliant, and the fact that he can pull off the feint on the turn with a defender on his backside or when facing the opposition has made him one of Europe’s most press-resistant midfielders. 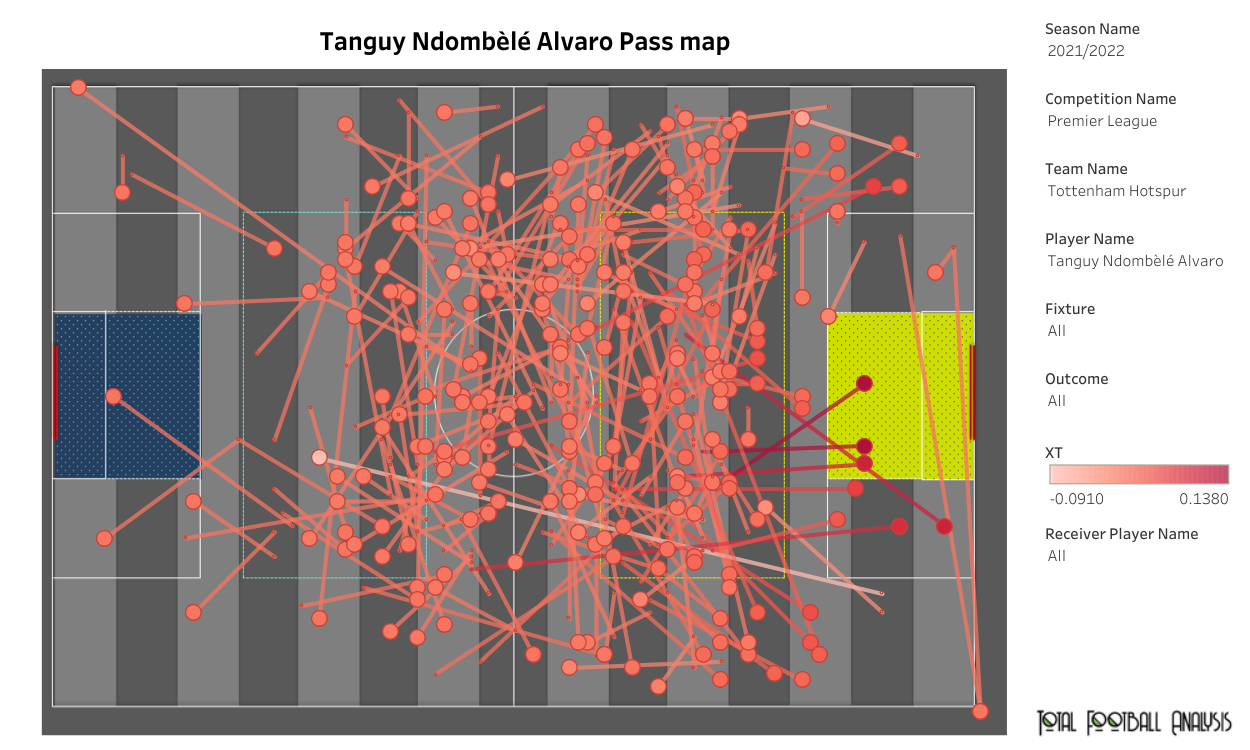 Ndombele combines his feints and other tricks with his ability to create space, making him an important player during the build-up and transition phases. Once he creates space for himself, he looks up to find a progressive pass as he loves playing more attacking football and can find his pass. His pass map shows that most of the passes he has played into the final third have generated a high xT and have been played in threatening positions. He has been heavily involved in the build-up phase and drops deep to receive the ball and then turn to move in the opposition’s half.

Ndombele played well under Pochettino last season and was seen to be a vital part of the squad then. The only drawback for the Frenchman is his match fitness, as he has been unable to be fit enough to play the entirety of 90 minutes. But Pochettino has managed the midfielder before and knows exactly how to utilize him in the right positions in the midfield. He can be a great fit for the PSG midfield, as they currently lack someone who can add creativity to the midfield.