Paris Saint-Germain are going all out to keep Kylian Mbappe, whose contract will expire in June, making him a free agent. The capital club is willing to go to any length to convince the French international to sign a new contract. The Frenchman’s contract with the French giants is set to end in June, and he is expected to join Real Madrid this summer. With everyone anticipating Kylian Mbappe to leave Paris Saint-Germain at the end of the season, the club has been linked with several potential attacking options. Robert Lewandowski has been identified as a possible successor for Kylian Mbappe by Paris Saint-Germain.

The Polish international has scored 47 goals in 41 games in all competitions this season and is currently the top scorer in both the Bundesliga and the Champions League. In his eight seasons with Bayern, Lewandowski has scored an incredible 341 goals in 370 appearances and is only behind Gerd Müller in their all-time record scorer’s list. 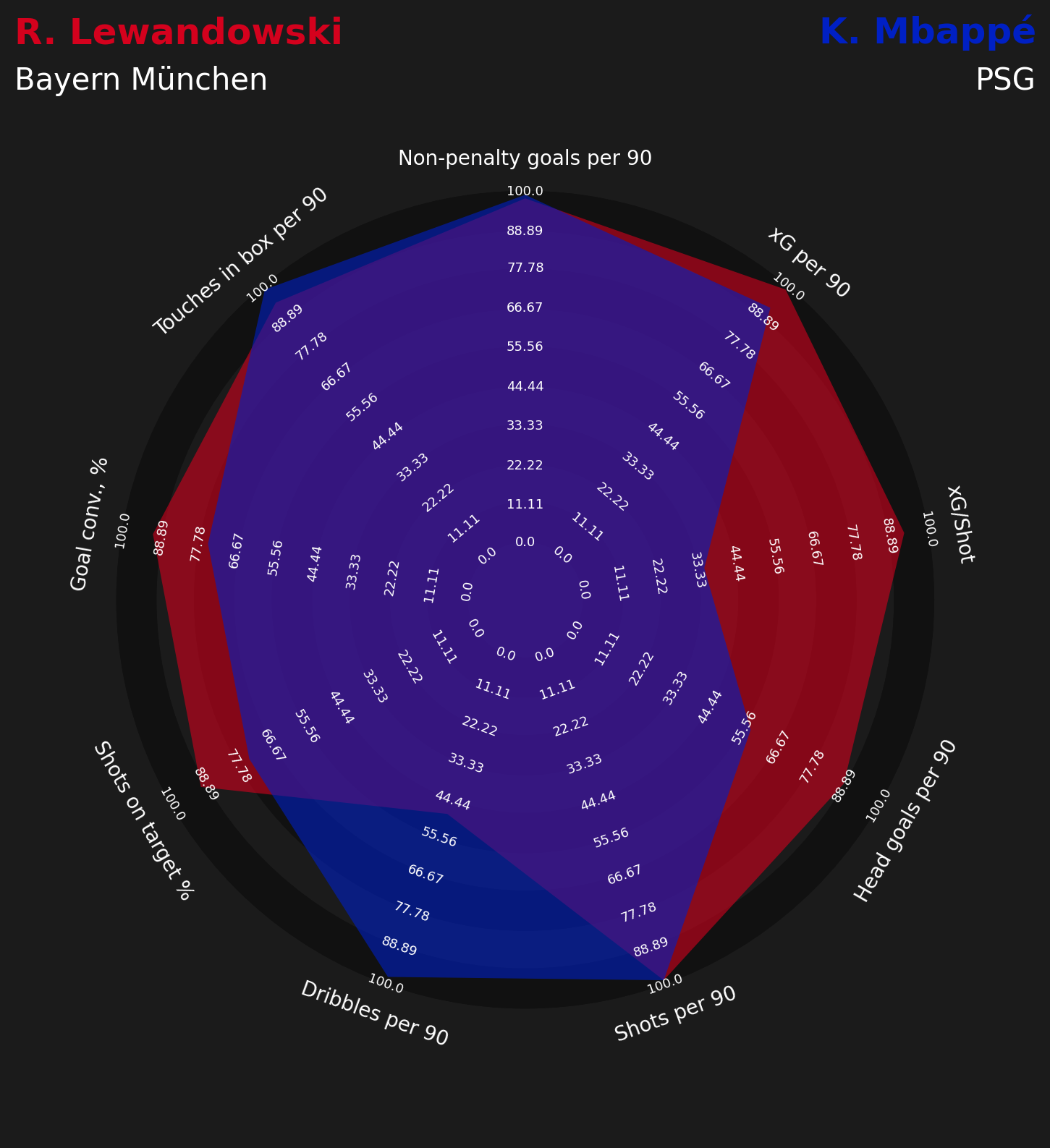 The above visual shows us the comparison between Robert Lewandowski and Kylian Mbappe. The visual indicates that both players have similar stats in terms of touches in the box, shots per 90, and xG per 90. But Robert Lewandoski is a bigger threat in front of the goal as he has a higher xG per shot and also has a better shot on target percentage. Kylian Mbappe, on the other hand, has attempted more dribbles, as he is more of a wide forward and likes to cut in from the flanks. Lewandowski also has more headed goals per 90 minutes and is a huge threat in the box. 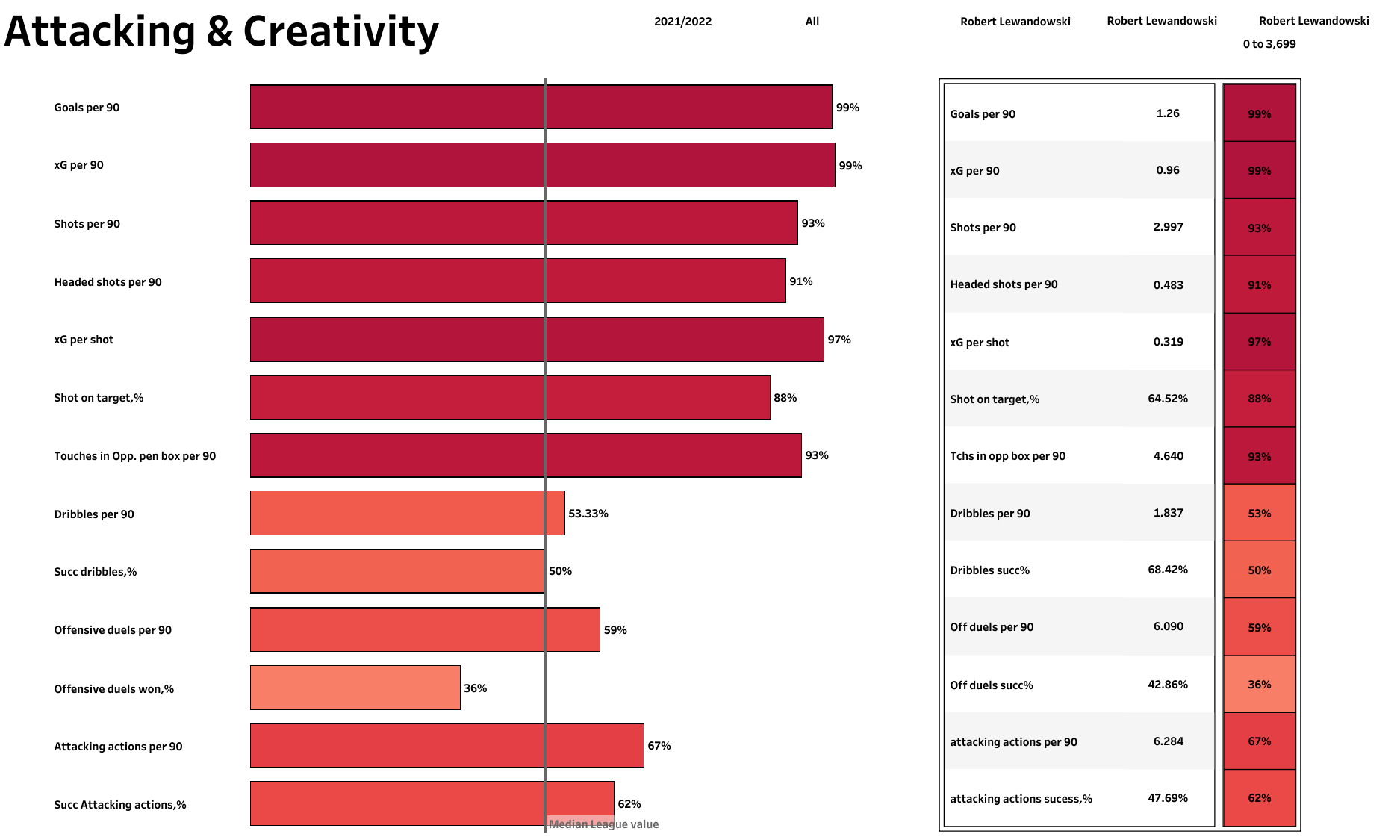 Robert Lewandowski has scored 13 goals in the UEFA Champions League and is the top scorer so far. Unfortunately, his side were knocked out of the tournament in the quarter-finals by Villarreal. The above visual shows us his attacking and creativity metrics from the 21/22 season. Lewandowski has averaged 1.26 goals per game and has an xG of 0.96 per 90 minutes. He ranks highly for the number of touches he has taken in the opposition’s penalty area. The Polish striker is not much of a dribbler and relies on his movement inside the box to score goals. He has attempted only 1.837 dribbles per 90 minutes but has completed 68% of his dribbles. 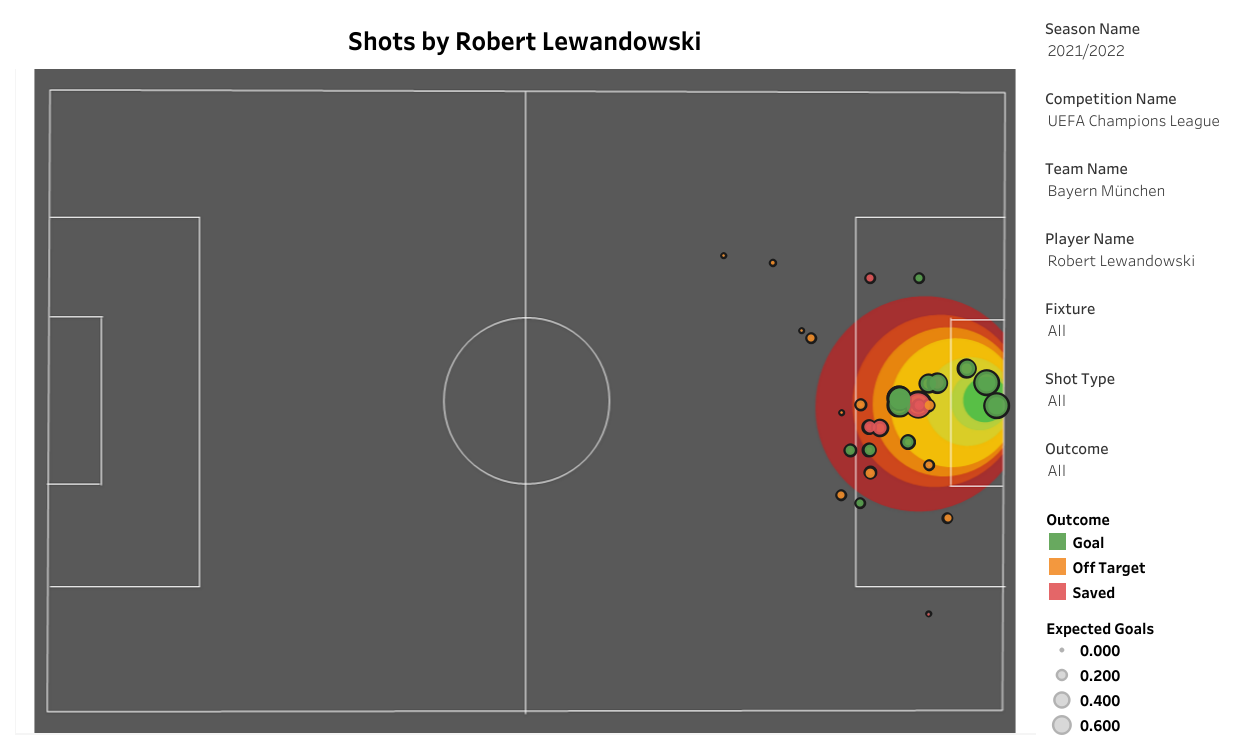 The 33-year-old has attempted 31 shots on goal in the 10 games he has played in the Champions League. Lewandowski is highly effective inside the box as the striker has managed to get 65% of his shots on target. From his 20 shots on target, Lewandowski has scored 13 goals. He is one of the best finishers in the world right now and has a very high conversion rate. The above visual shows us that most of his shots are attempted from inside the penalty area near the penalty spot.

The Parisians have missed an out-and-out striker this season and need someone inside the box who can convert the chances they create. Lewandowski has proved himself as a prolific striker on each and every stage in professional football and despite his age, the Polish international can still be relied upon for goals. Both players may not have a similar playing style, but PSG only want one thing from both of them, and that is goals.