Ever since Paris Saint Germain’s new sporting director, Luis Campos, announced his intention to sell Neymar, there has been a little bit of speculation about whether the Brazilian would actually leave the club. However, the odds are that Neymar will not leave PSG this summer. Still, the French champions need bench strength in attack, especially after Ángel Di María left the club. Julian Draxler and Mauro Icardi could leave this summer. One man who is a free agent and is available for any team to snap up is Ousmane Dembele. 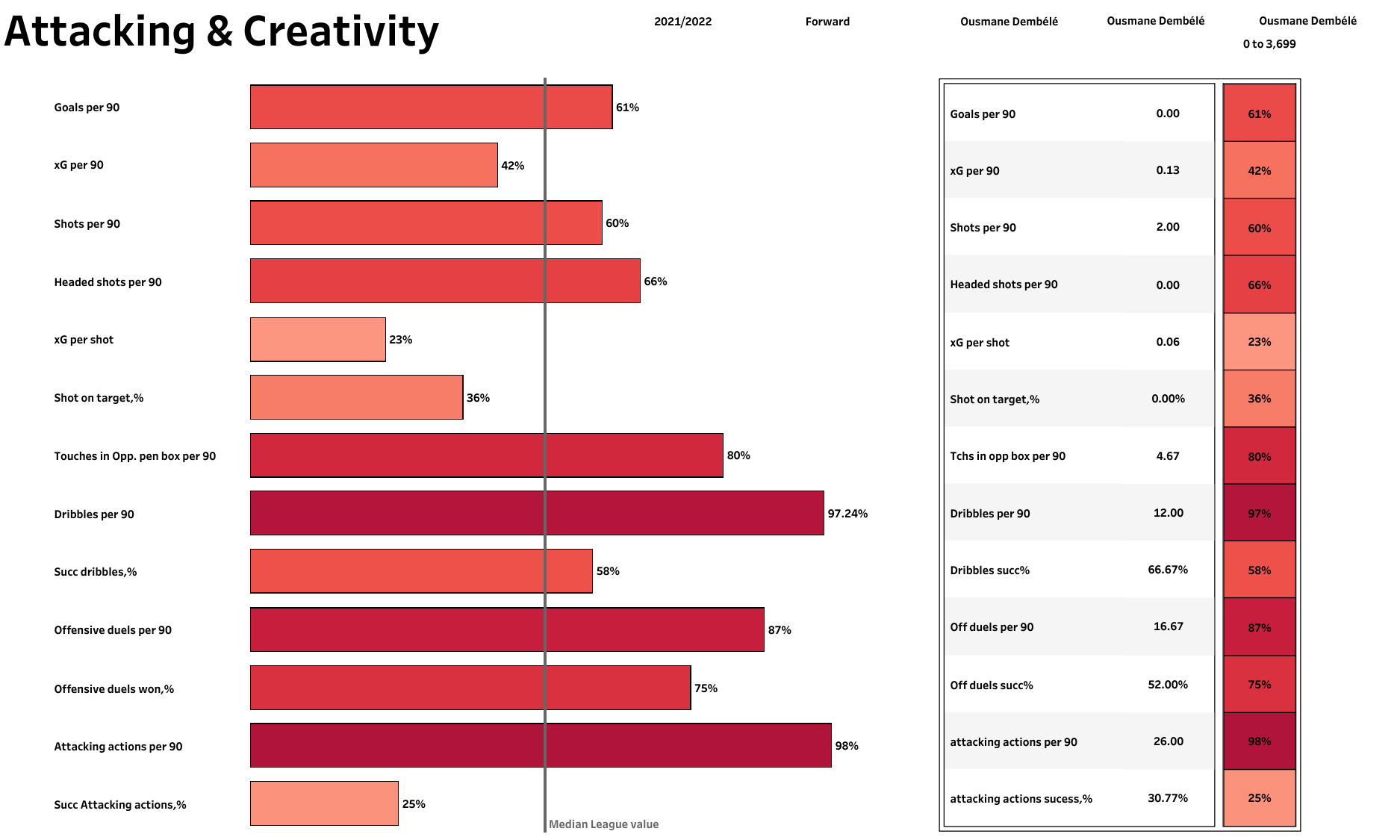 Dembele featured for Barcelona in 32 games across all competitions last season, including three in the UEFA Champions League. He did not score or assist during his time on the pitch, which was only 123 minutes. He fired off two shots per 90, but none of them hit the target. He made 4.67 touches in the penalty box per 90, which put him in the upper quartile. However, the Frenchman was a dribble specialist, attempting 12 per 90 whilst completing two-thirds of them. He participated in more than 16 offensive duels per 90. He was also involved in 26 attacking actions per 90. 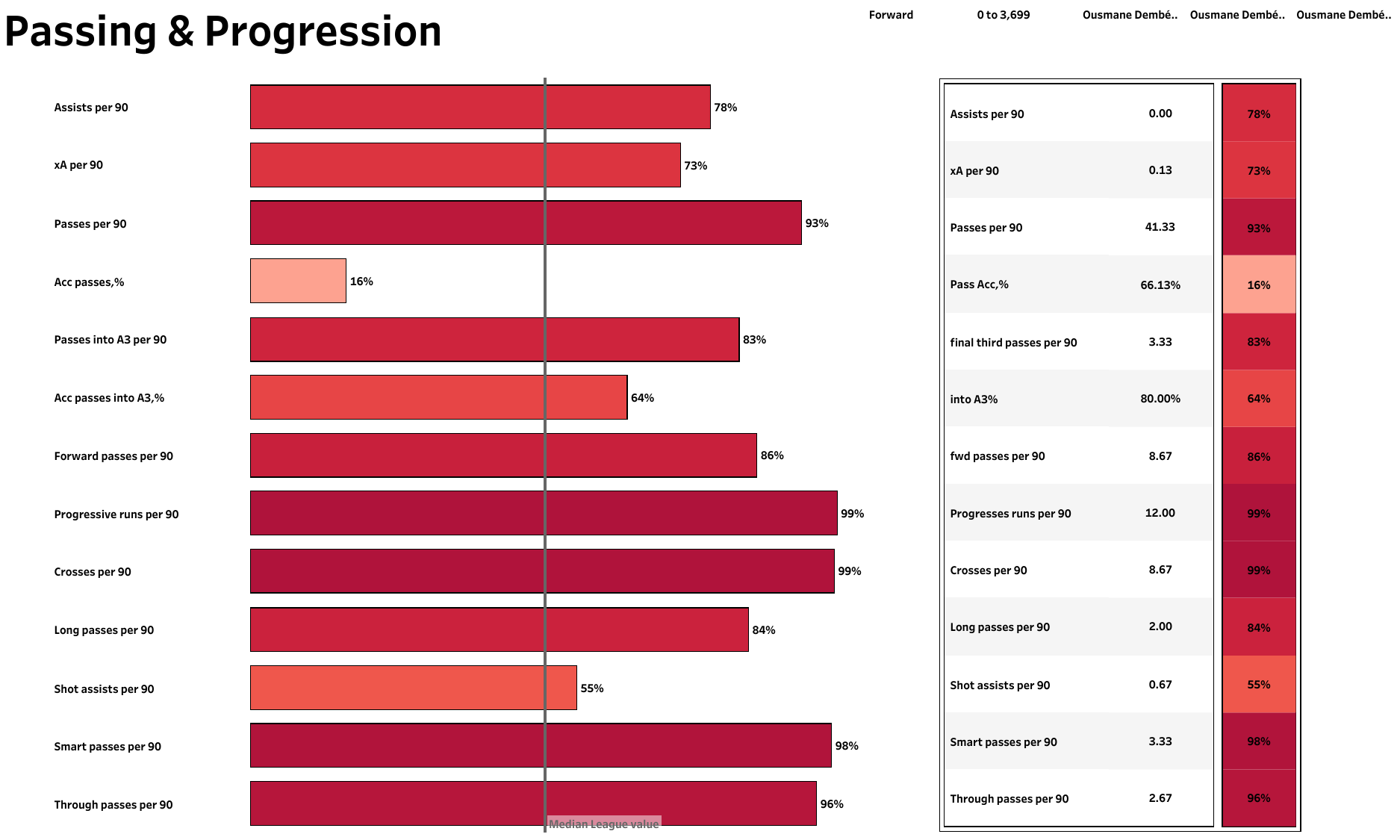 Dembele attempted more than 41 passes per 90, but his completion rate was only 66.13%, which ranked him in the bottom quintile. However, he fared much better as far as ball progression was concerned, having completed 80% of his passes into the attacking third out of 3.33 attempts per 90. The Frenchman ranked in the 99th percentile for progressive runs per 90 and crosses per 90, with 12 and 8.67 to his name, respectively. He generated 3.33 smart passes per 90, which put him in the top 2%. He was also ranked in the upper 4% of forwards in through passes per 90. Though these numbers look great, one must take into account the sample size of minutes played. 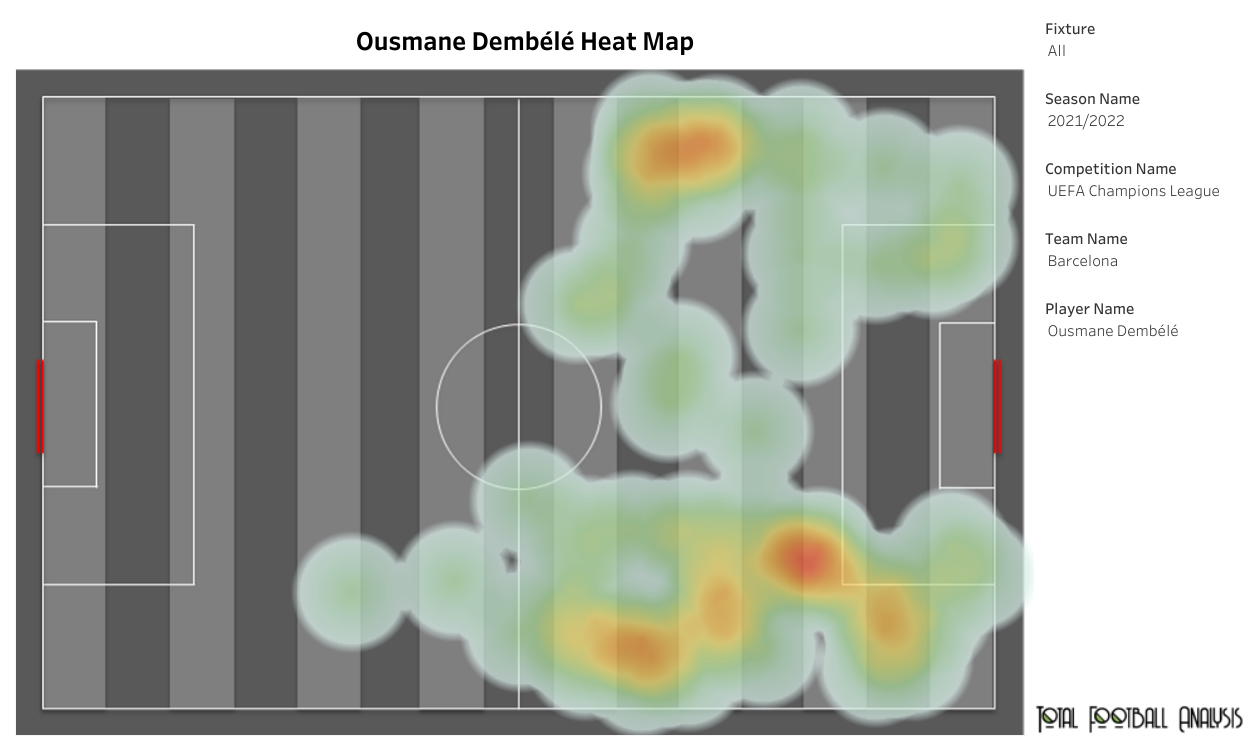 Dembele played on both the wings during his limited game-time for Barcelona, as seen in the above heat map, though he featured mostly on the right. He would often cut inside from the right flank with the ball at his feet, thereby allowing the full-back to make overlapping runs from deep. The Frenchman completed five progressive passes and balls into the final third each, four passes into the penalty area and two key passes. He was a liability in defence, failing to make a tackle, interception or clearance. He attempted just 9.29 pressures per 90. 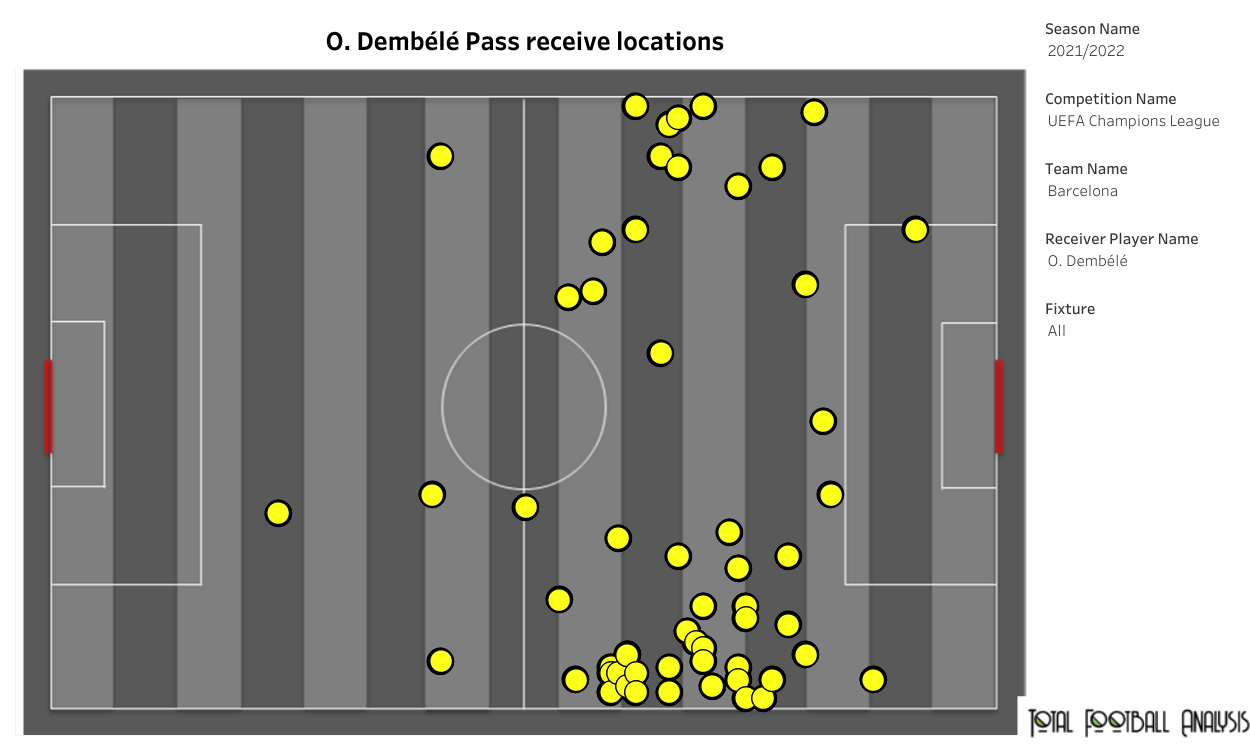 Dembele made most of his touches on the right flank, while some of them came on the left wing. Overall, he touched the ball 70 times in the final third and the penalty box combined. He made 13.6 progressive carries per 90, five carries into the final third per 90 and 4.29 carries into the penalty area per 90. Additionally, the Frenchman received 10 progressive passes per 90.

Ousmane Dembele may not have shined in the UEFA Champions League, but he was consistently overachieving on his xA in LaLiga, especially in the second half of the season. While he is officially a free agent, there is still a chance that Barcelona could re-sign him. So, if PSG want the former Borussia Dortmund man, they will need to act fast to acquire his services.