This season, Paris Saint-Germain’s transfer strategy has changed significantly as a result of the hiring of Luis Campos as their new Sporting Director. They opted to recruit young players with potential in the form of Vitinha from FC Porto and, more recently, Hugo Ekitike from Stade de Reims, beating Newcastle United for his signature. Another youngster who could follow in the footsteps of Vitinha and Ekitike is RB Leipzig’s Nordi Mukiele. According to reports, the deal is expected to be completed by the end of the week. 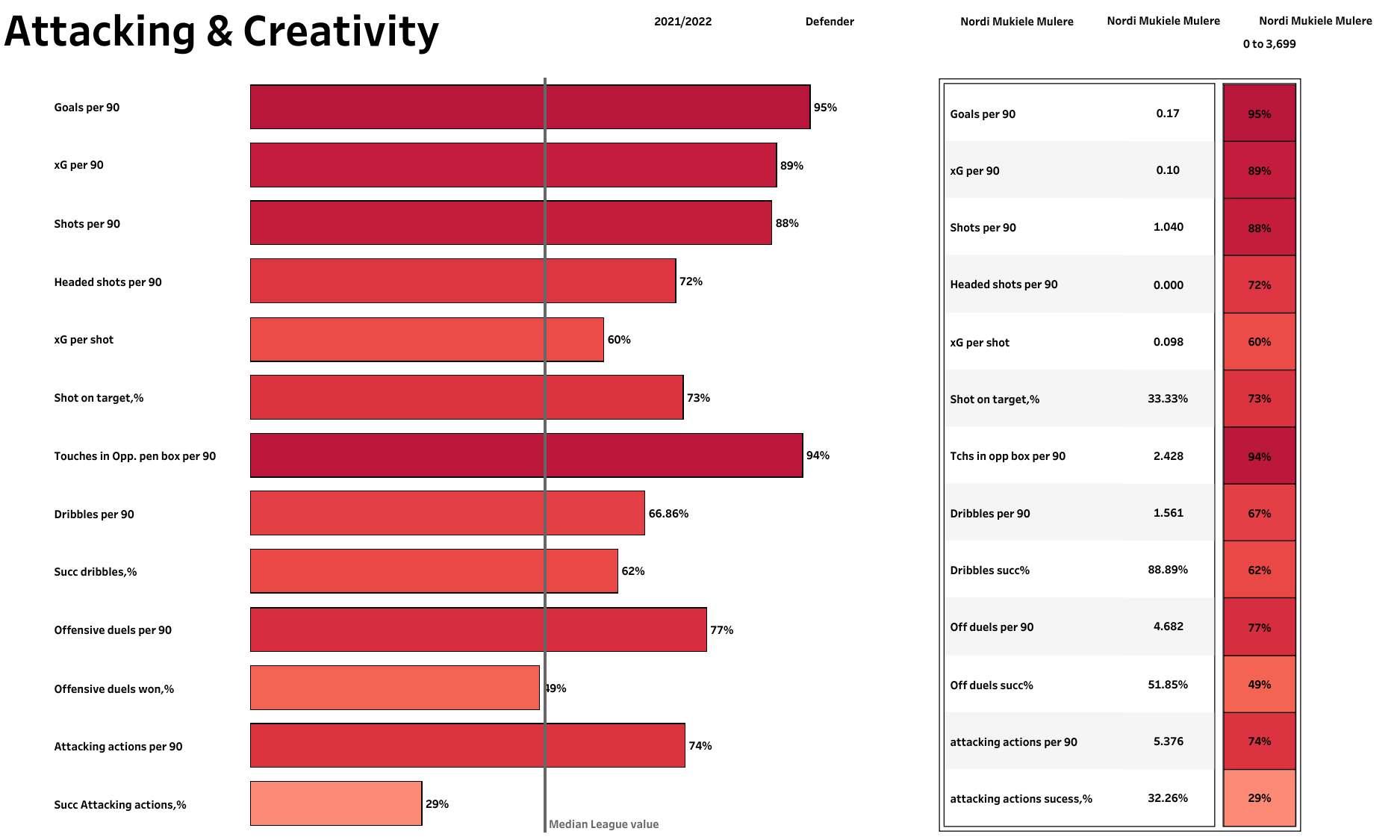 Mukiele featured in 38 games for RB Leipzig in all competitions, which included all six that the team played in the UEFA Champions League. He scored once in the 485 minutes he was given on the pitch. He overachieved on his xG by a slight margin as he netted at a rate of 0.17 per 90, good enough for the top 5% among defenders. He attempted 1.04 shots per 90 and hit one-third of his shots on target. The Frenchman also found himself in good positions frequently, registering 2.43 touches inside the opponents’ penalty area, putting him in the top 6%. 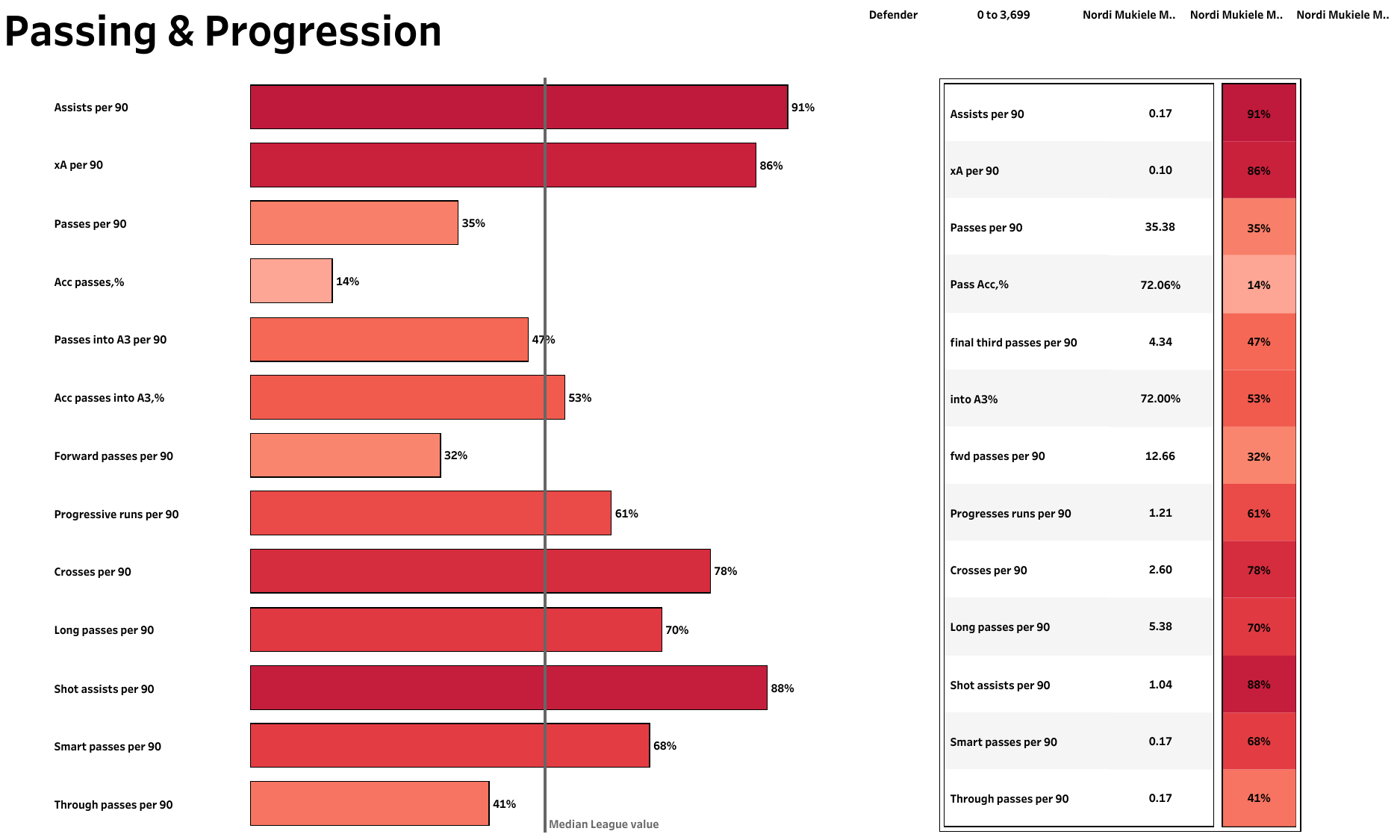 Mukiele provided one assist in addition to his one goal. This resulted in a goal involvement every 242.5 minutes. The Frenchman’s rate of 0.17 per 90 placed him in the top 9% of defenders. He marginally overperformed on his xA per 90 of 0.1, exactly like his xG. His involvement in build-up plays, with only 35 pass attempts per 90 and a pitiful pass accuracy of 72%, was his one weakness. He ranked in the upper quartile, with 2.6 crosses into the box per 90. He performed relatively better (in terms of ranking) in shot assists per 90, with 1.04 to his name, ranking in the upper 12%. 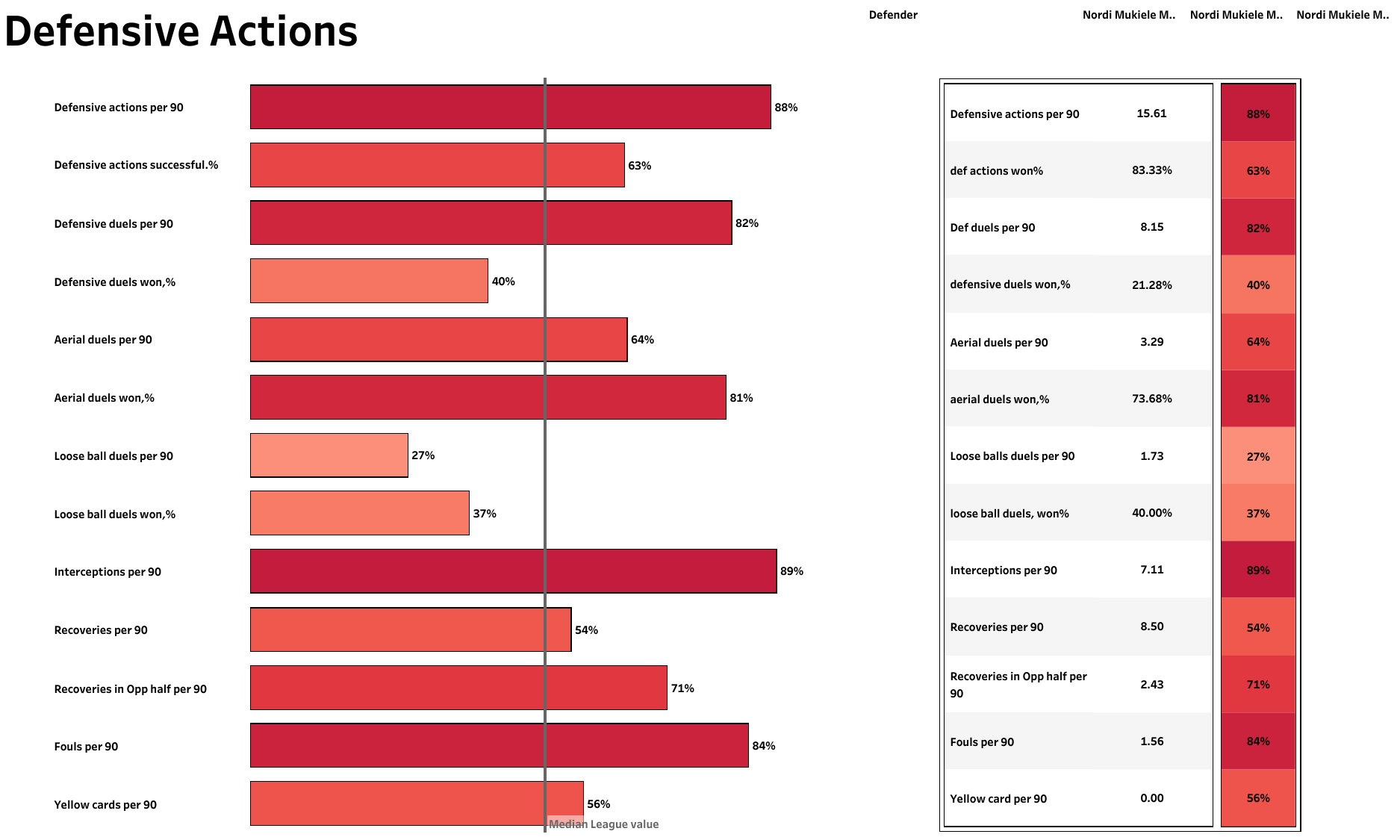 Mukiele tried 15.61 defensive actions per 90, ranking the Frenchman in the topmost quintile of defenders. He had an 83.33% success rate. Additionally, he attempted 8.15 defensive duels per 90, and his success rate in aerial duels was 73.68%, using his height of 187 cm to good effect. He made 7.11 interceptions per 90 and 2.43 recoveries in the opponent’s half per 90, ranking him in the 89th and 71st percentiles for defenders, respectively. The one major problem he had was his fouling. He committed 1.56 fouls per 90, which put him in the upper fifth (for unwanted reasons). 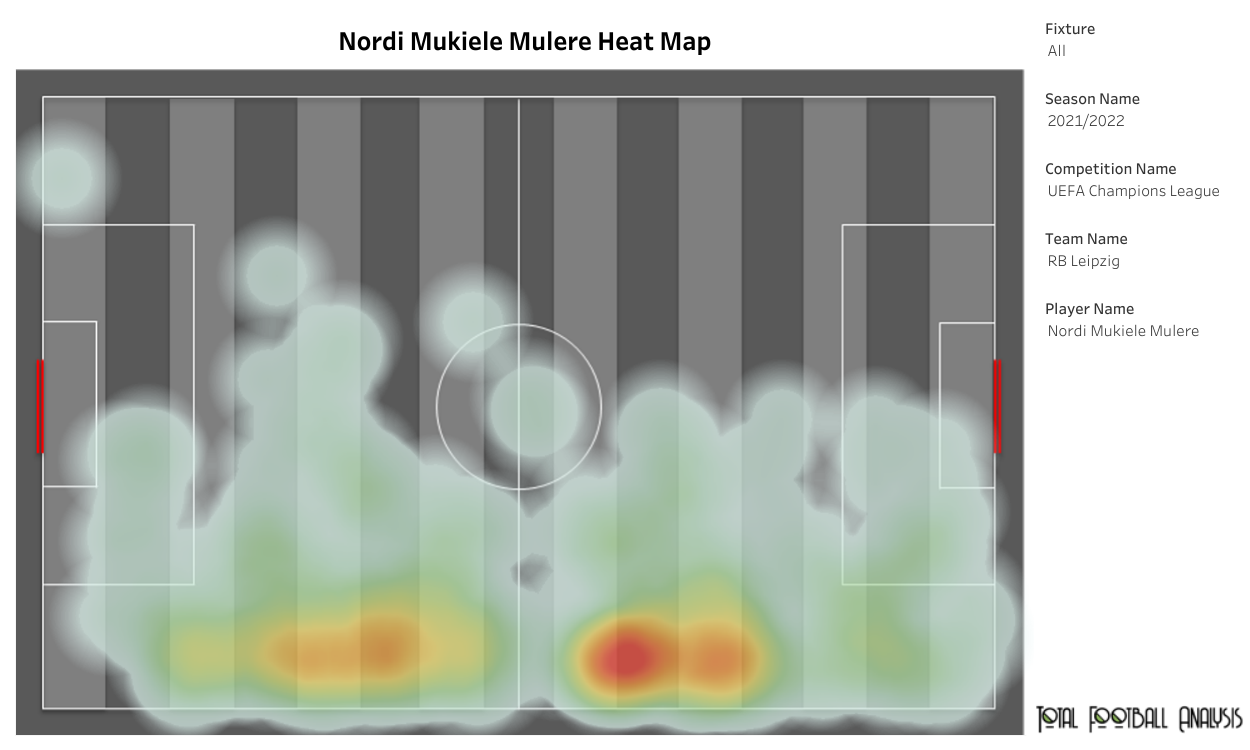 Mukiele largely stuck to the right wing as a full-back even though he occasionally ventured inside. However, as an attacking right-back, he was always on the lookout for opportunities to make advancing and overlapping runs into the final third and in & around the penalty area. While going forward, the Frenchman completed 4.81 progressive passes per 90, 2.96 balls into the attacking third per 90 and 3.89 progressive carries per 90. Defensively, he tried 15 pressures per 90, 4.44 tackles & interceptions per 90, 3.15 blocks per 90 and 2.78 clearances per 90.

Nordi Mukiele had a solid time with the Red Bull-owned squad in East Germany. But in his four seasons since signing from Montpellier in the summer of 2018, he has not even reached 2,000 minutes of Bundesliga action once. And at PSG, due to the presence of Achraf Hakimi, he may not be a guaranteed starter. He has been brought in primarily to provide competition to the Moroccan man.