Despite clinching their 10th Ligue 1 title, Paris Saint Germain failed on the continental stage once again, having been knocked out by eventual winners, Real Madrid, in the Round of 16. To improve their hopes of achieving glory in Europe, the French Champions somehow managed to retain Kylian Mbappe after it looked certain that he would depart for Real Madrid. However, other areas of the pitch need desperate reinforcement, particularly the midfield. The club is planning to offload a few players who have disappointed. One midfielder who has been linked to joining the French giants in the past few days is Liverpool’s Naby Keita. Here, we will look at what the Guinean might bring to PSG’s midfield. 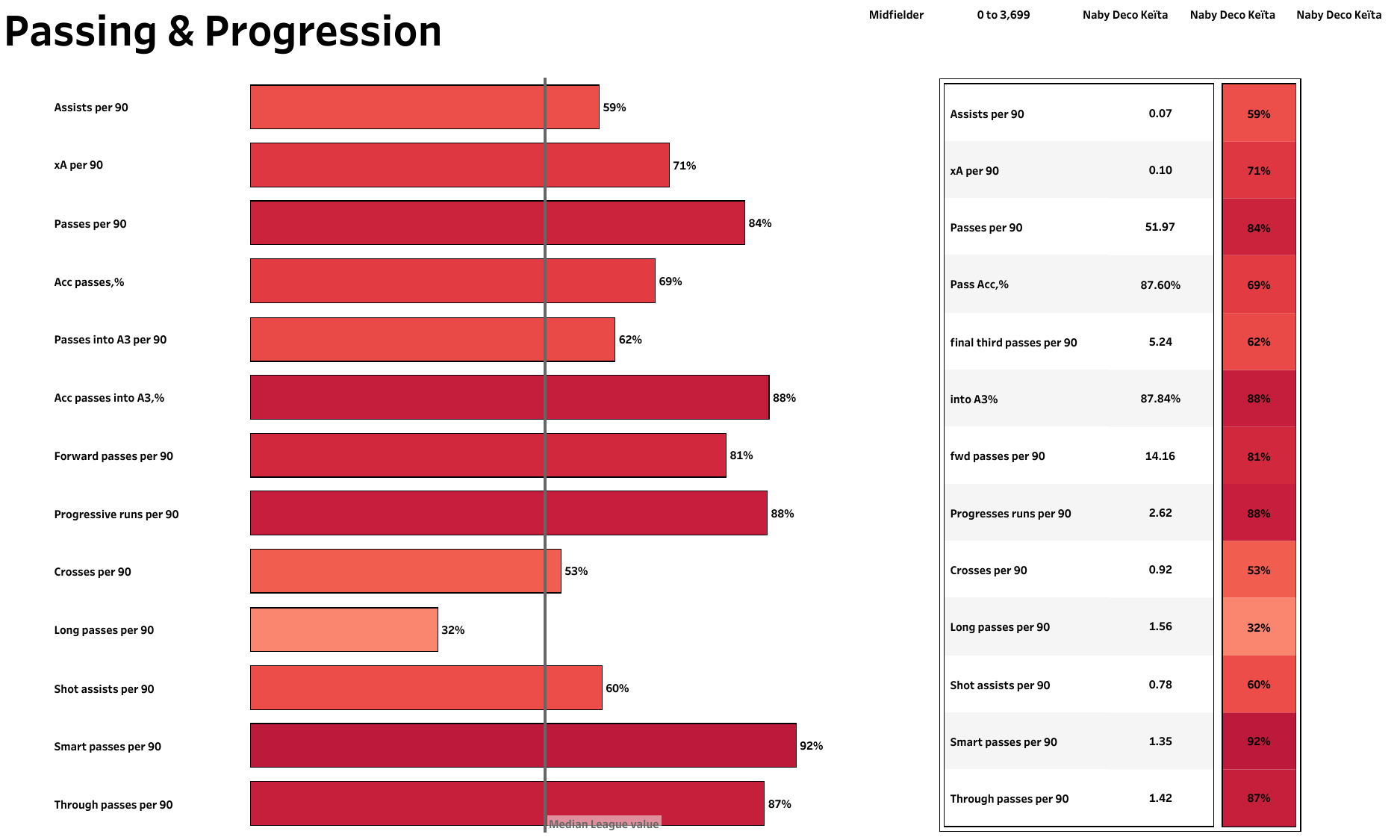 Keita managed to amass only 1,173 minutes in the Premier League season gone by. The Guinean scored thrice and assisted once during his limited playing time. He attempted nearly 52 passes per 90 and had a success rate of 87.6%. One interesting thing to note here is that his pass accuracy into the final third was slightly higher (87.84%) than his overall passing accuracy. The former RB Leipzig man made 2.62 progressive runs per 90, 1.35 smart passes per 90 and 1.42 through passes per 90, ranking him above the 85th percentile in all the three categories. 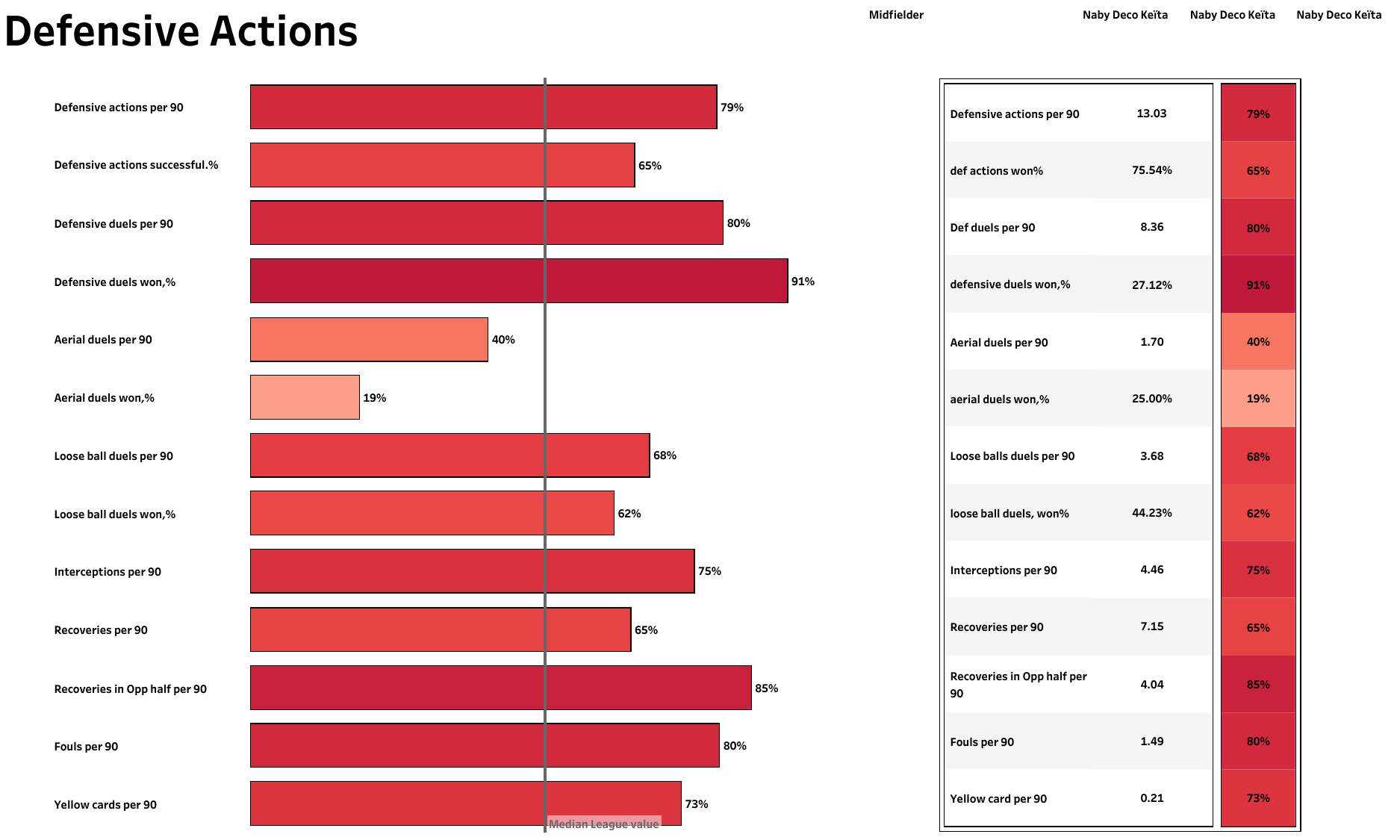 Keita attempted over 13 defensive actions per 90 for Liverpool this Premier League season, coming out successful on three-fourths of the occasions. The Guinean captain attempted over eight defensive duels per 90, winning 27.12% of these duels, which put him in the top 9% for midfielders in this category. He made 7.15 recoveries per 90, but what was more impressive was that more than half of these recoveries came in the opposition’s half, showing his pressing ability and intensity. His only weakness seems to be his aerial ability, winning only 25% of his aerial duels. But he is only 172 cm tall, so this may be excusable. 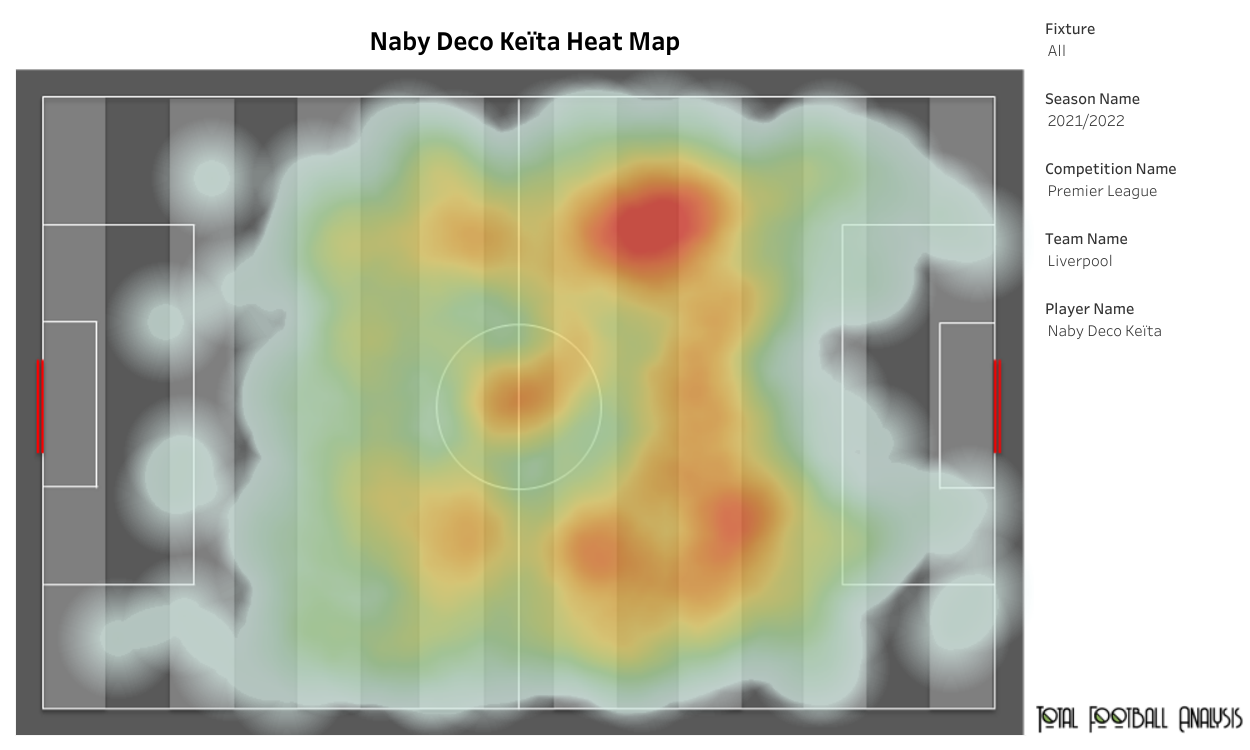 Shown in the above visual is the heat map of Naby Keita for Liverpool in the recently concluded Premier League season. From midfield this campaign, Keita completed six progressive passes per 90, 4.69 passes into the attacking third and 1.69 passes into the opponents’ penalty box. He also made 7.08 progressive carries per 90 for the Reds. Defensively, he has put in the hard work demanded by Jurgen Klopp. The Guinea skipper made 24.7 pressures per 90, 5.15 tackles and interceptions per 90 and 1.85 blocks per 90.

Naby Keita’s contract at Anfield expires in June 2023. The odds of his contract renewal at Liverpool, and the Reds cashing in on him are very similar. If the Merseyside team decides the latter, then PSG should act quickly to bring in the dynamic midfielder. But before that, they will have to clear out their own deadwood.

Previous articlePSG player reveals his shock
Next articleTransfer Talk: Wilfred Ndidi – Could he be the man to reinforce the defensive midfield position at PSG?