Paris Saint Germain’s disappointing exit in the Round of 16 of the UEFA Champions League to eventual winners Real Madrid has prompted change at the board level. Sporting Director, Leonardo, has been relieved of his duties and has subsequently been replaced by Luis Campos. Kylian Mbappe might have stayed put at Parc des Princes but other areas need desperate reinforcements. While PSG strengthened the left-back position with Nuno Mendes from Sporting Clube de Portugal, his deputies – Juan Bernat, Layvin Kurzawa and Abdou Diallo – have simply not been good enough and must be moved on. That would leave only Mendes at left-back, and Les Parisiens would need to bring in a backup. One possible name could be Chelsea’s Marcos Alonso. Here, we will have a look at the Spaniard’s season at Chelsea. 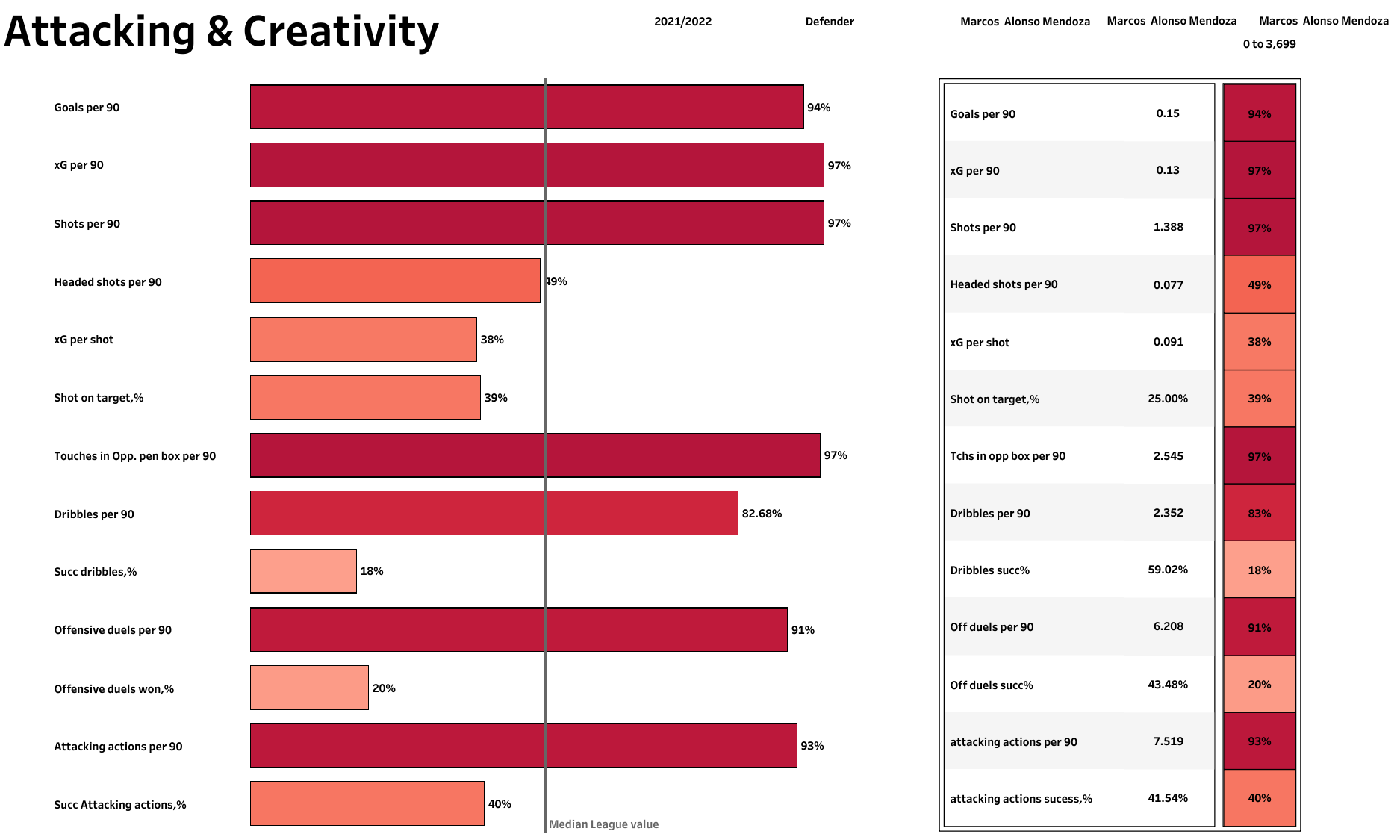 Alonso featured for Chelsea in 28 out of the 38 games in the recently concluded 2021-22 Premier League season. He played for 2,172 minutes on the pitch. The Spaniard scored four goals for the Blues from the left-back position at a rate of 0.15 goals per 90, which was in the top 7% of defenders. His xG per 90 of 0.13 per 90 ranked him in the 97th percentile. The former Fiorentina man attempted 1.38 shots per 90, which was also in the top 3% whilst he registered over two and a half touches per 90 in the opposition’s penalty area. 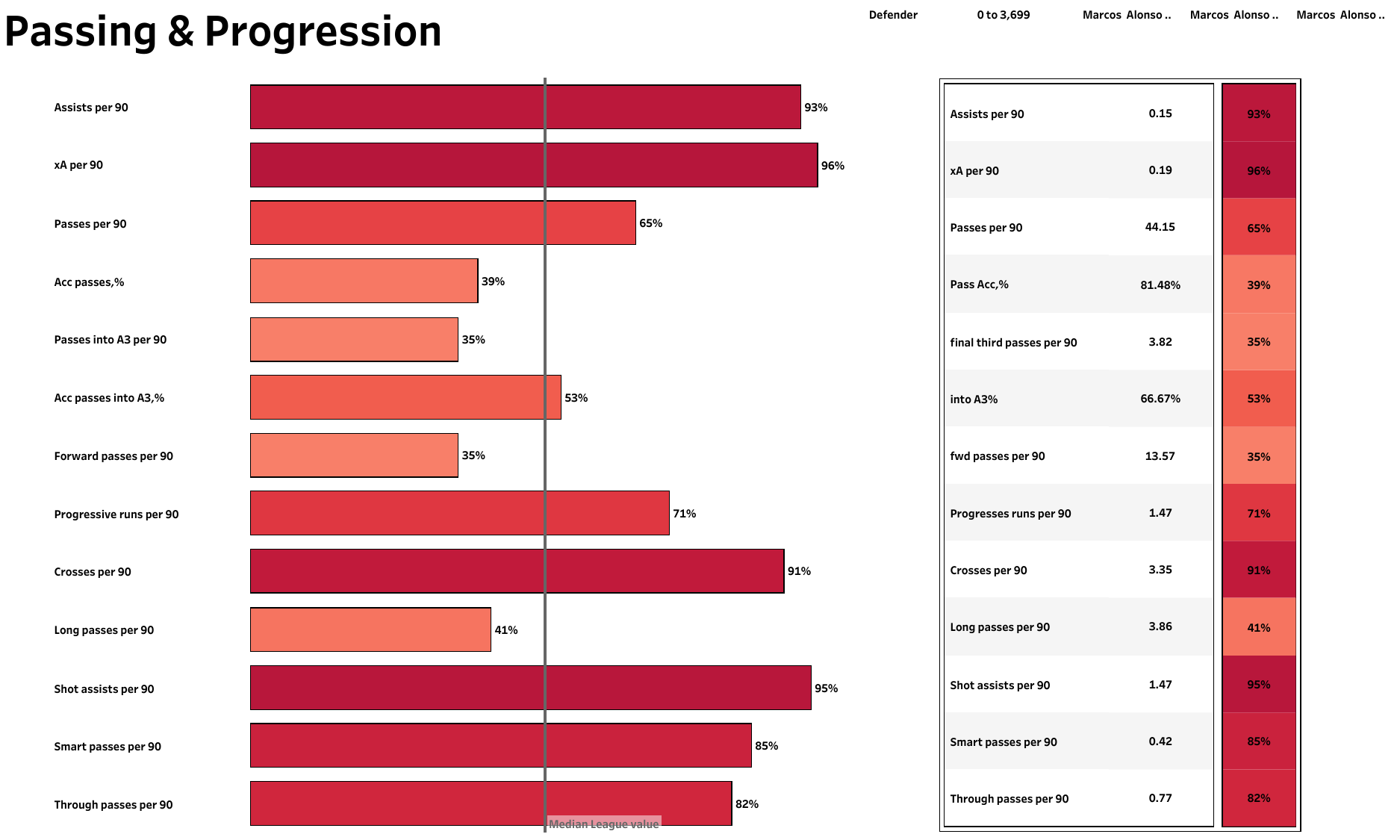 In addition to his four goals, Alonso provided five assists in the Premier League season just gone by. He was involved in a goal every 241 minutes. His rate of assists at the end of the campaign stood at 0.15, slightly lower than the xA per 90 of 0.19. Still, Alonso cracked into the top 7% of defenders in this category. The former Sunderland man attempted over 44 passes per 90 for Chelsea in the league. Additionally, as a full-back, the Spaniard completed 3.35 crosses per 90, putting him in the 91st percentile for defenders in this category. 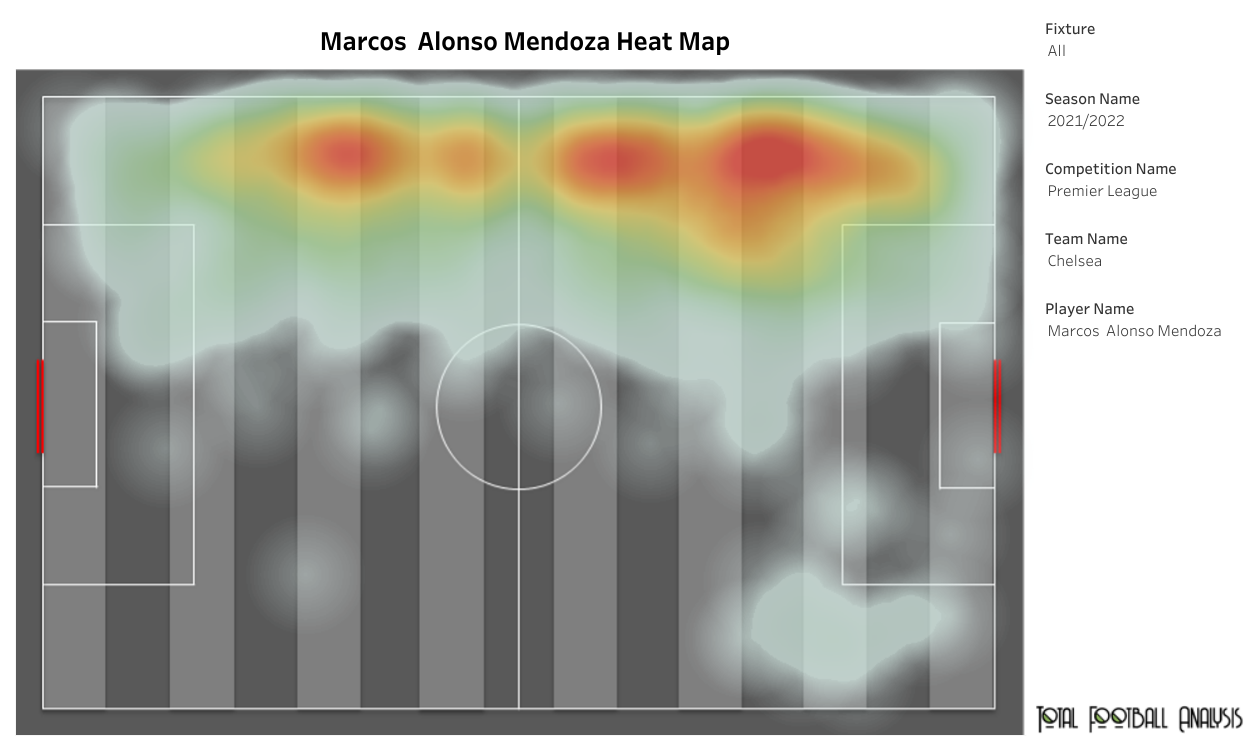 Shown above is his heat map in the recently concluded EPL season. We can see that Alonso occupied the entire left flank by himself and did not need any help going forward. Alonso attempted 6.21 offensive duels per 90 and 7.52 attacking actions per 90 on the left wing. He frequently carried the ball into the attacking third and even into the opposition’s penalty area. 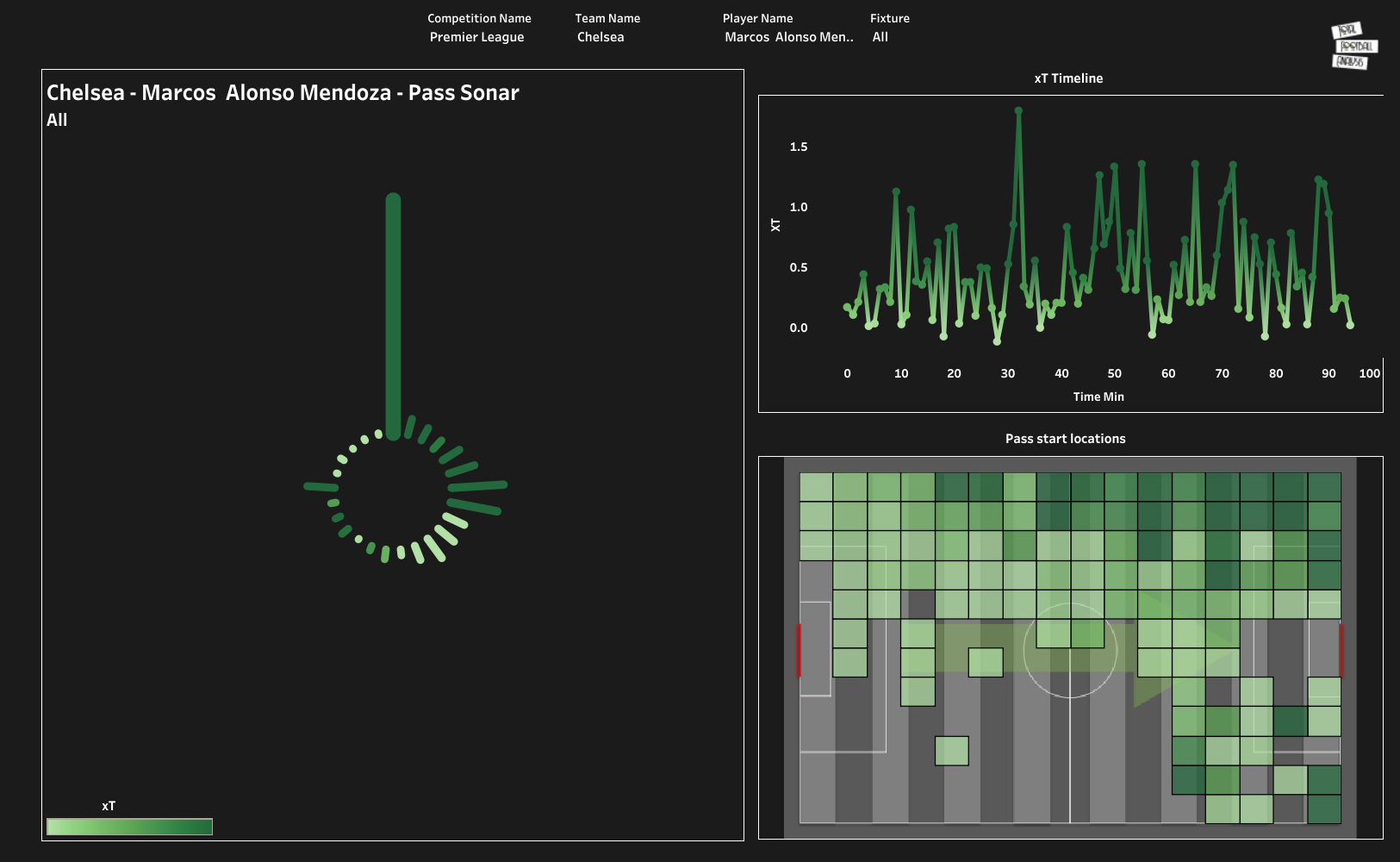 The above visual shows the pass sonar, xT timeline and xT map of Alonso in the 2021-22 EPL season. Most of Alonso’s threat came from the left wing in the final third as well as in and around the penalty box of the opponents. His passes into the penalty area generated as much xT as his forward and progressive passes, and he regularly produced an xT value of 1.0, even exceeding 1.5, at times.

Marcos Alonso had a good season at left-back for Chelsea as he established himself as the first choice in his position. However, with Antonio Rudiger and Andreas Christensen leaving the West London club, Chelsea are unlikely to let go of any other defenders.