Paris Saint-Germain midfielder Marco Verratti is, without a doubt, one of the best midfielders in world football, and he proved that on Tuesday night in the Champions League with an outstanding display against LaLiga giants, Real Madrid. The 29-year-old, who helped Italy to a famous European Championship win at Wembley last summer, ran the show against a midfield trio of Toni Kroos, Luka Modric, and Casemiro at the Parc des Princes.

Marco Verratti is a workhorse as he works relentlessly to win every single ball back to stop his opponents’ counterattack by any means. He is an amazing passer of the ball with great vision and can dribble past his opponent with ease. When he possessed the ball, he was so cool and composed, spinning with such ease that it seemed pointless to try to press him. He is a quick, agile, and skilled midfielder with great dribbling skills and close ball control. Verratti’s passing accuracy, vision, and range allow him to create chances and control the tempo of the game. 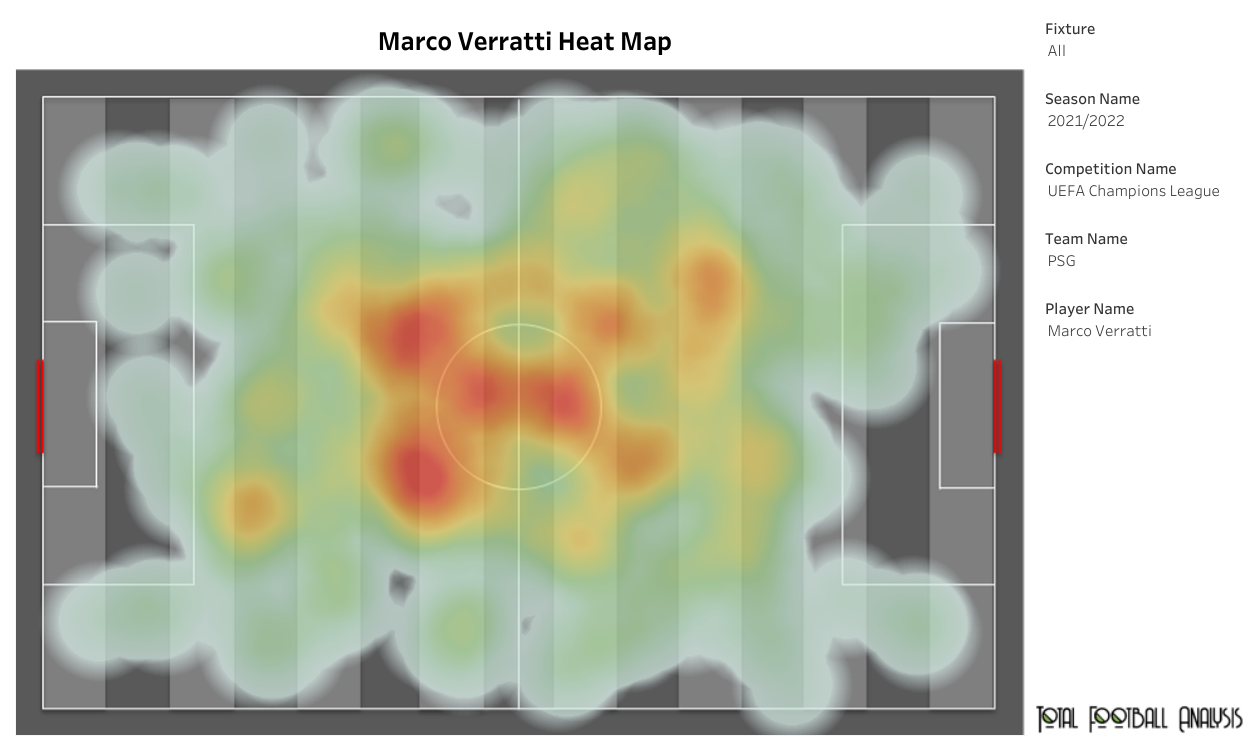 The above visual shows us the heat map for Marco Verratti from the four games he has played in the Champions League this season. The heat map indicates that Verratti is ever-present in the centre of the pitch and works very hard to win the ball as well as help his team keep possession of the ball. He prefers receiving the ball deep in front of his centre-backs and can turn swiftly to progress with the ball into the opposition’s half. With Neymar only fit for the bench, Verratti seemed to be playing in a slightly more advanced role than usual in the Paris Saint-Germain midfield. He was asked to mark Luka Modric in the game, while also setting the tempo for forward plays with Kylian Mbappe and Lionel Messi. 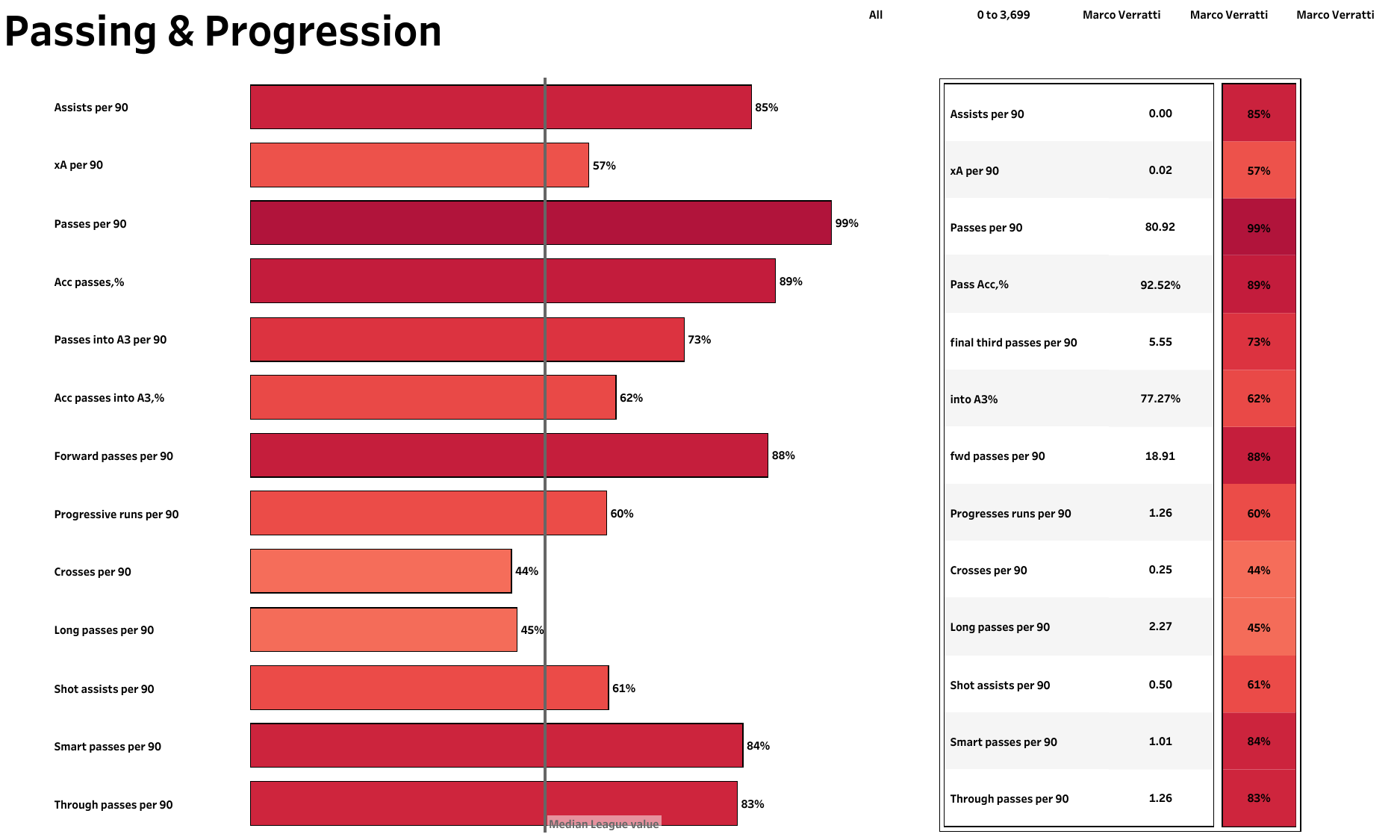 The above visual shows us his passing and progression metrics, and these metrics are significantly higher than the median league value. Verratti is a highly skilled passer of the ball and also has the vision to spot the runs made by his players. The Italian has attempted 80.92 passes per 90 minutes and has completed 92.52% of these passes. He is ranked highly for the number of forward passes and has completed 77.27% of the forward passes he has attempted. 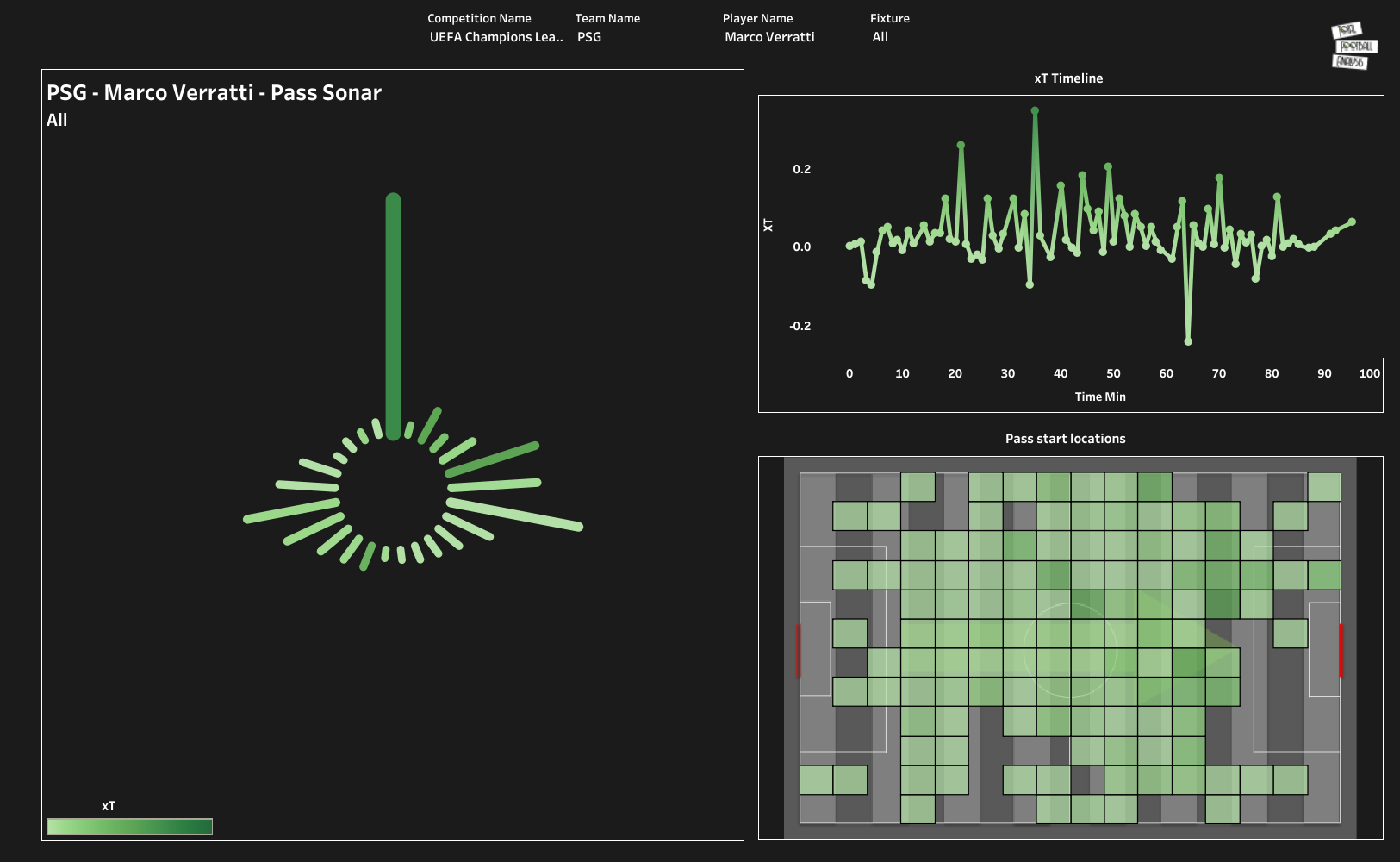 The midfield maestro played a series of brilliant through passes for Lionel Messi and Angel Di Maria, but he also performed his defensive duties and wasn’t afraid to make important tackles and interceptions. Verratti has played the majority of his passes towards the opposition’s goal. The pass start locations indicate that Verratti has played most of his passes from the centre of the pitch, and he prefers staying behind his attackers in an attacking transition. 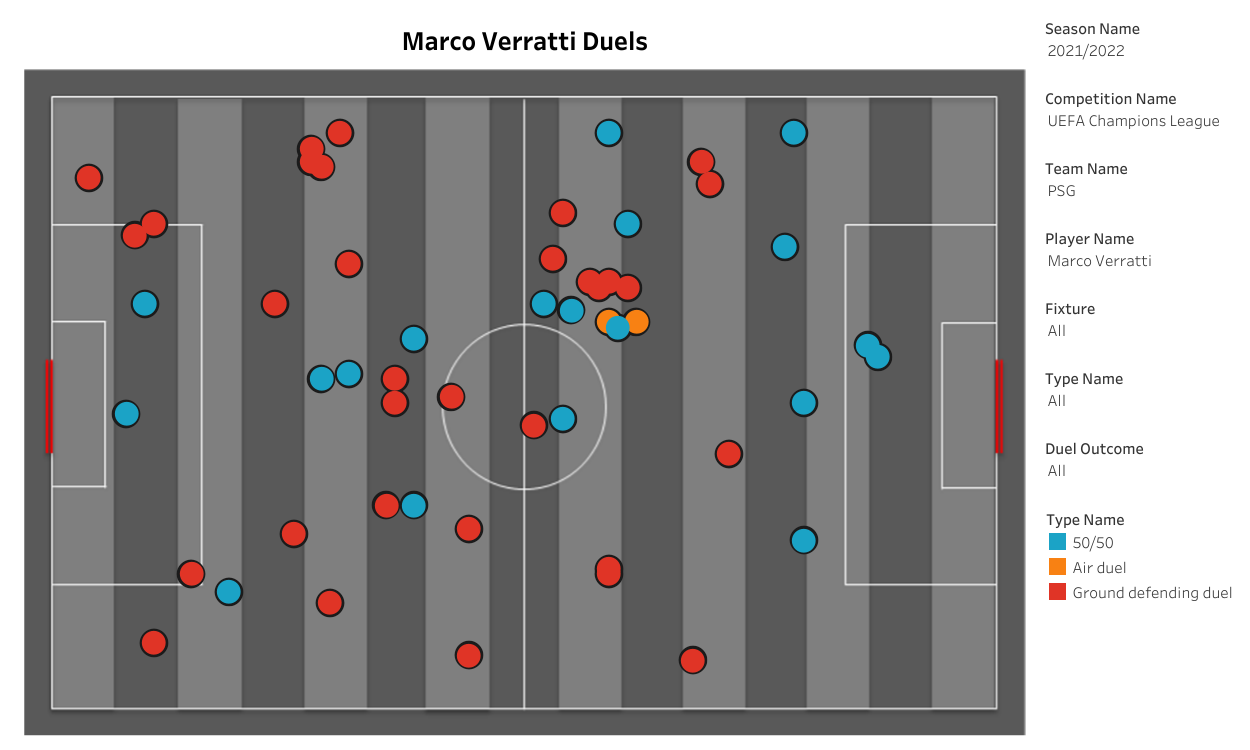 Verratti does not hesitate in his decision-making when he tries to challenge every ball that comes into his area. Because of his low centre of gravity, he can intercept balls directly off the feet of opposition players. The above visual indicates that Verratti has attempted most of his duels near the halfway line. Verratti has attempted 18.15 defensive actions per 90 minutes and has been able to complete 84.72% of these defensive actions. He has the highest success rate in winning loose ball duels as he has won approximately 50% of the 50-50 challenges he has attempted.

PSG will be going into the second leg of the UEFA Champions League with a 1-0 lead and will be hoping to secure a spot in the next round of the tournament. PSG are a far better side with Verratti in the lineup, and that can be seen in their performances this season. If the Italian can stay fit and perform the way he is performing right now, he can help PSG complete their dream of winning the Champions League.