A once highly touted Bundesliga talent from Schalke has slowly fallen off the radar, despite playing for one of the biggest clubs in the world. Just months after Julian Draxler’s arrival in Paris, Neymar arrived with a record transfer fee to play in Draxler’s position of left-wing. Draxler was almost immediately overshadowed by Neymar, and has since become less and less of a main offensive force for the Parisians. The 27-year-old German has been playing at Le Parc des Princes since joining Paris Saint-Germain from Wolfsburg back in January 2017. The Germany international has not been able to recover his place in the starting XI. The attacking midfielder featured for Germany as they beat Israel 2-0 last week, the first time he has played a full match since a Coupe de France clash in January. The 28-year-old has made just 18 appearances in Ligue 1 this year, having fallen down the pecking order with Lionel Messi, Neymar, and Angel Di Maria ahead of him. He has only started in eight of his 24 appearances under new manager Mauricio Pochettino.

In total, Draxler has won Ligue 1 three times, the Coupe de France and Coupe de la Ligue three times apiece, and the Trophee des Champions twice, while also helping PSG reach the finals of the Champions League in 2019-20. Draxler has made 198 appearances for PSG, scoring 26 goals and providing 41 assists, including two this season. Draxler only has four goal contributions in 2021-22 in all competitions and has mostly started his games on the bench. 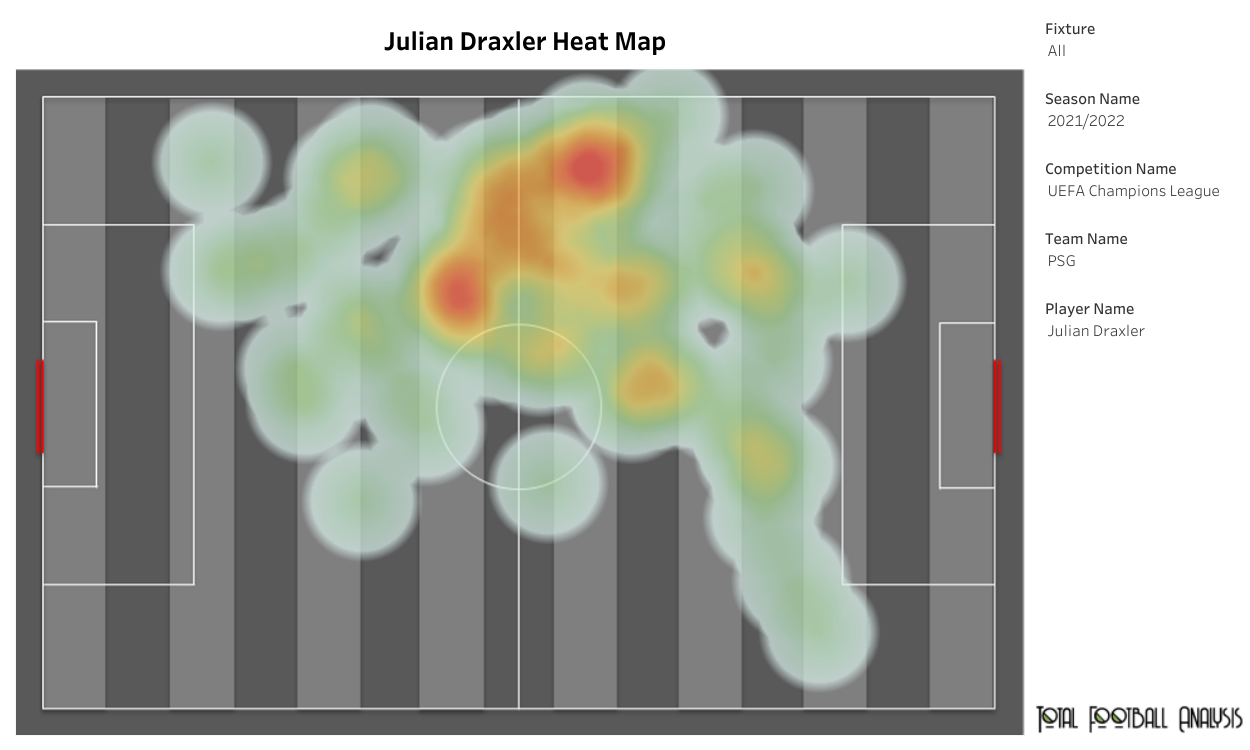 When Julian Draxler came to PSG, his preferred position was that of a winger. As time passed, the German was shifted to a more central role as a number eight or a wide midfielder. With the likes of Messi, Mbappe, and Neymar in PSG’s front three, it has been a tough task for Draxler to break into the team as an attacker. His best chances of being featured in the starting XI will be as a number eight. As his heat map suggests, Draxler has played most of his games in the UEFA Champions League as a midfielder, occupying the left central part of the pitch. 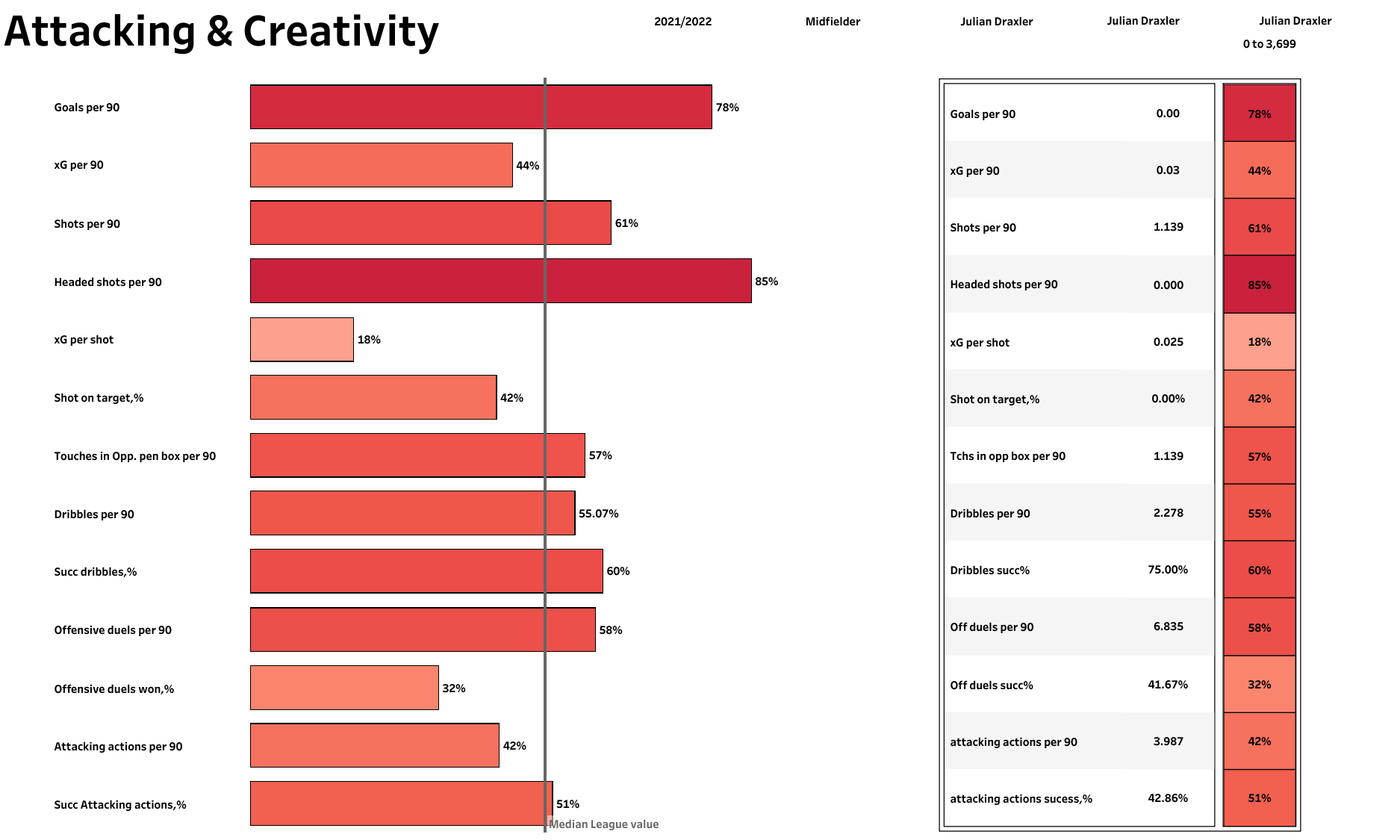 Draxler has struggled to get game time in the Champions League and has only played 142 minutes of football. Most of his appearances have been as a substitute off the bench. His greatest asset is his versatility, as the midfielder can play in several positions in the midfield and can also be deployed as a winger. He has great feet, is capable of dribbling past opponents, and has an impeccable first touch to bring the ball under his control. His quick feet make him adept at taking on opponents, especially in those wide areas as he attempts to make space for a cross. He has attempted 3.987 attacking actions per 90 minutes and has been able to complete 42.86% of these actions. 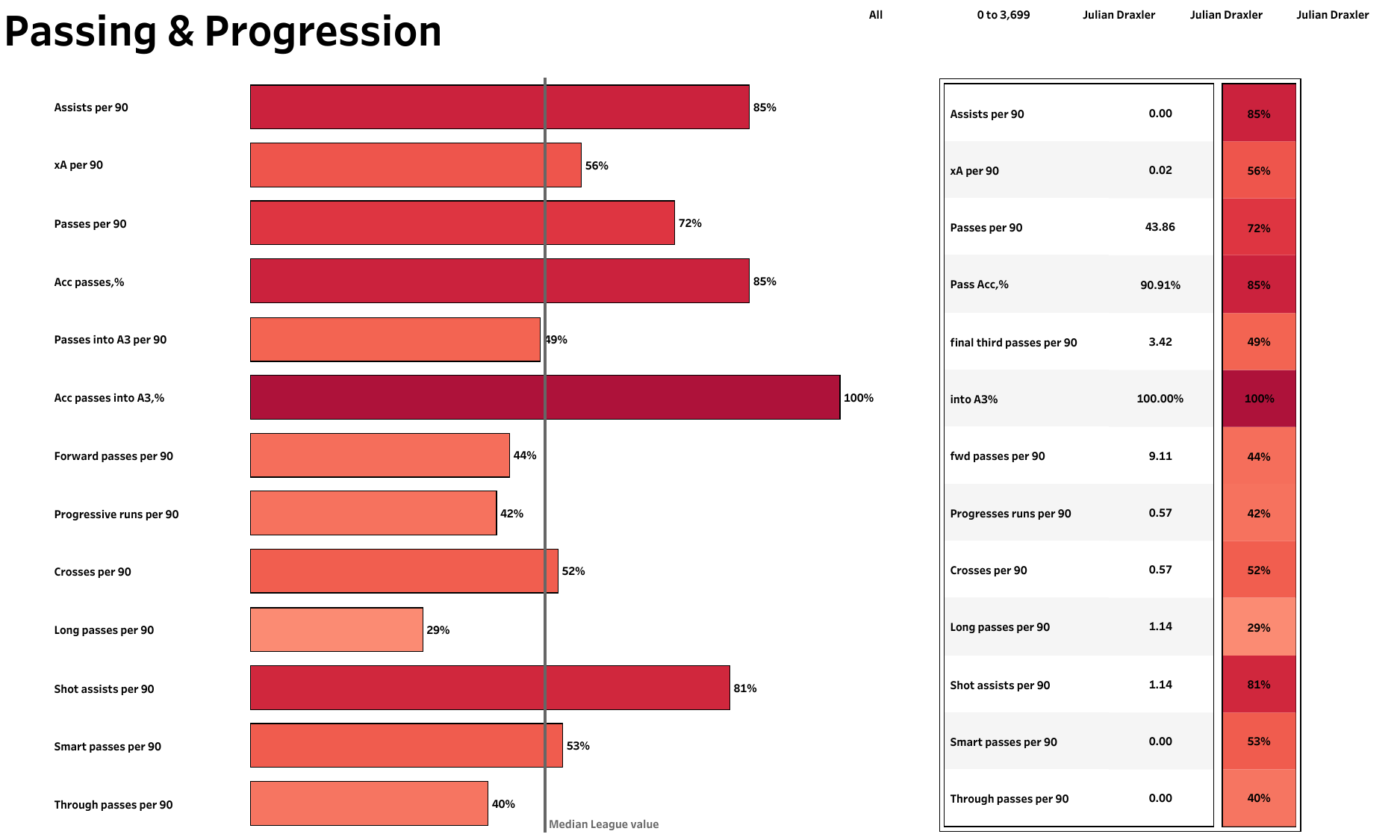 Draxler has attempted 43.86 passes per 90 minutes and has a high pass accuracy rate of 90.91%. He only has 1.14 shot assists per 90 minutes which is due to his lack of playing time. Draxler is more of a playmaker and can play well in a position just behind the line of attackers. But with Messi playing as a false nine in the squad, Pochettino has preferred to go with a more defensive midfield who can win back balls and feed them to their attackers. Draxler is a midfielder with an attacking mindset and looks to drive forward when he has the ball.

Draxler has a contract up to 2024 with Paris Saint-Germain, but there are already rumors that the German international might want to leave the club due to lack of game time. But with strong rumors about Mbappe leaving this summer, Draxler might get a chance to replace the speedy winger on the flanks and fight for a place in the starting XI.