PSG signed Danilo on loan in October 2020, and he was often used as a centre-back under now-Chelsea manager Thomas Tuchel. Fast-forward one season, and the 30-year old is Mauricio Pochettino’s most-used defensive midfielder and one who is adding goals to his game at an impressive rate. PSG made his deal permanent before the 2021 season and now the midfielder is an important member of the squad.

Danilo has started almost all of his games as a defensive midfielder under Pochettino, yet the Portugal international has already become the subject of discussion over his new position in France. He has played both his games for Portugal in the international break as a central defender and has done very well in those two games.

PSG were humiliated by AS Monaco in their last game before the international break as Monaco beat the Parisians 3-0. It was a very disappointing performance from the city defense, especially Kimpenbe and Marquinhos, who also had a dismal performance against Real Madrid in the second leg of the Round-of-16 Champions League tie. The centre-back pairing has been a part of the club’s defensive setup for a couple of years now, but the inconsistency is still evident. Right from silly errors and lack of awareness in key areas on the pitch, the duo has arguably had the worst season of their PSG careers. 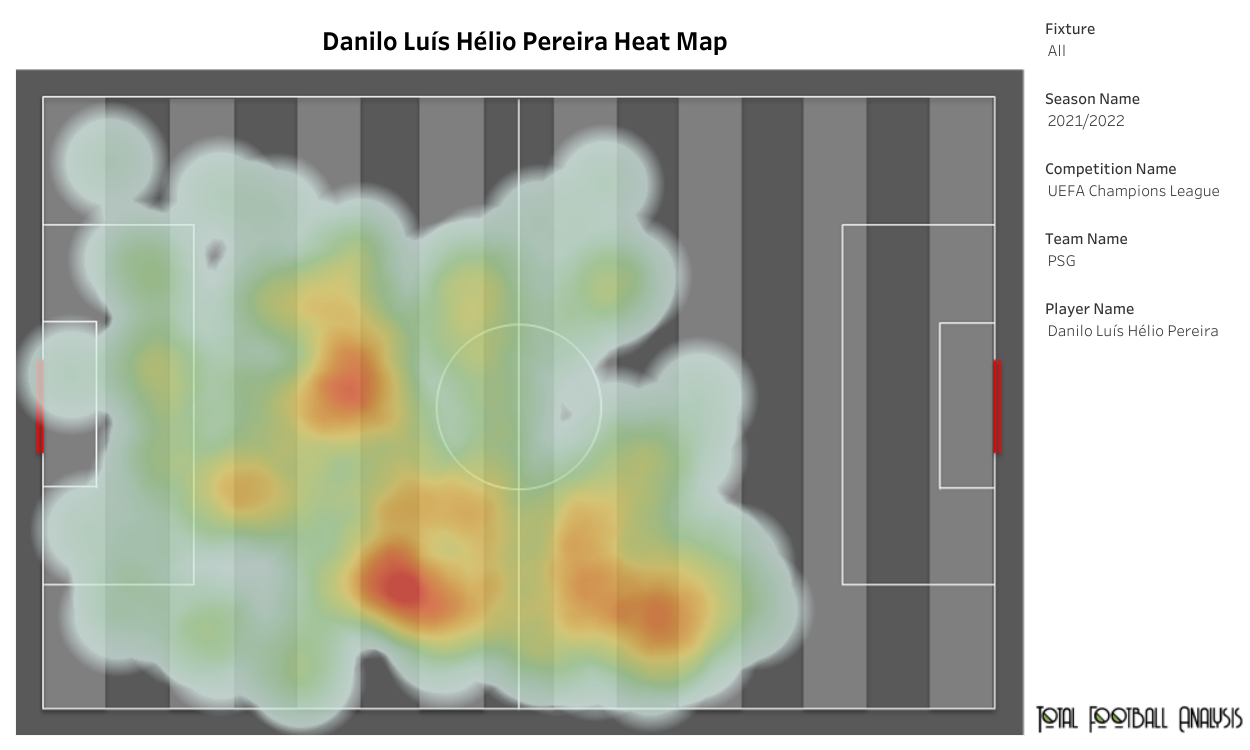 The above heat map indicates that Danilo has made most of his appearances as a defensive midfielder but has featured as a centre-back as well. He shows a great work rate throughout the game and understands the positioning for a centre-back. 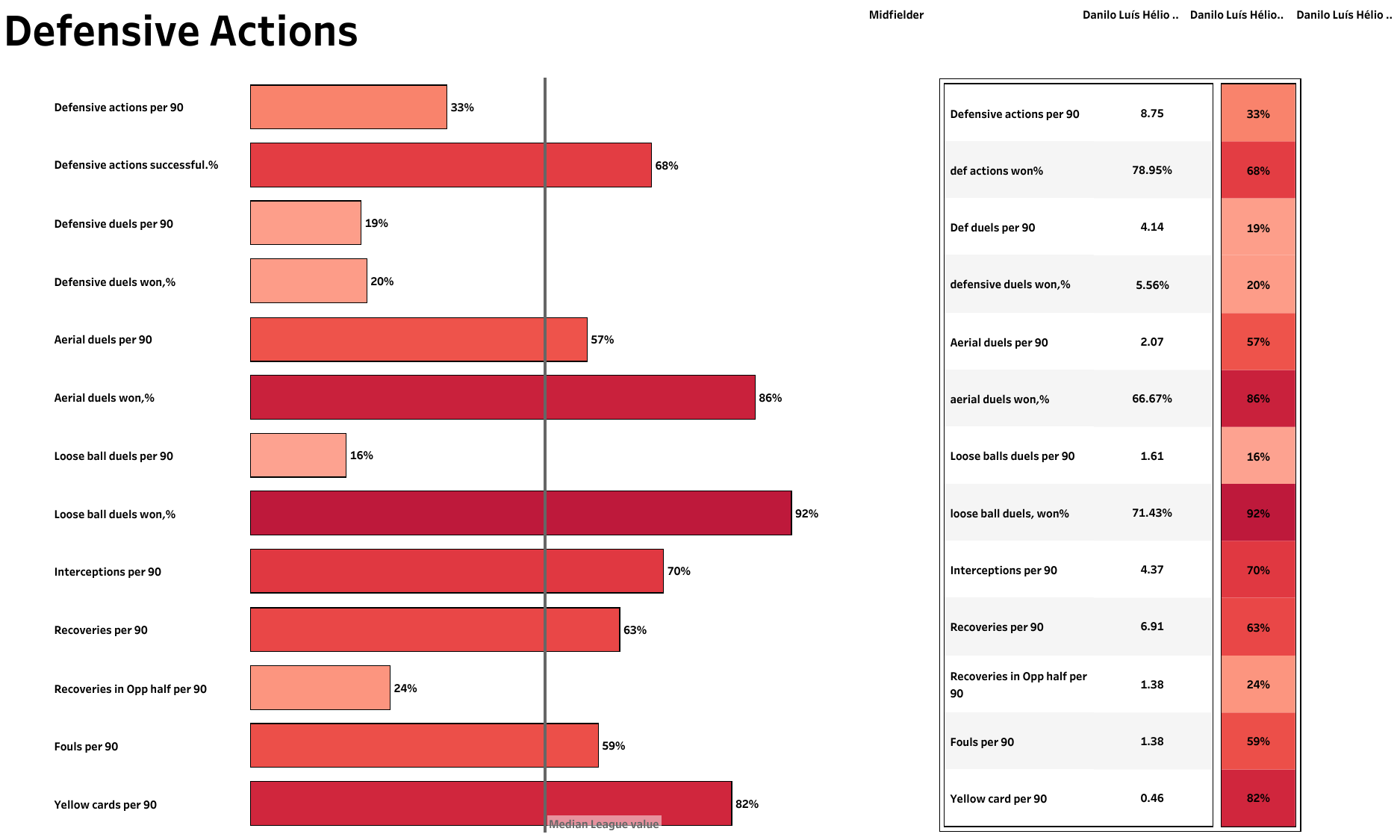 The above visual shows us the defensive metrics for Danilo from the UEFA Champions League season. Danilo has made seven appearances in the UCL and has also made a couple of appearances as a centre-back. He has attempted 8.75 defensive actions per 90 minutes and has won approximately 80% of these actions. He has a very high success rate in winning aerial duels and has also won 71% of the loose ball duels he has competed for. 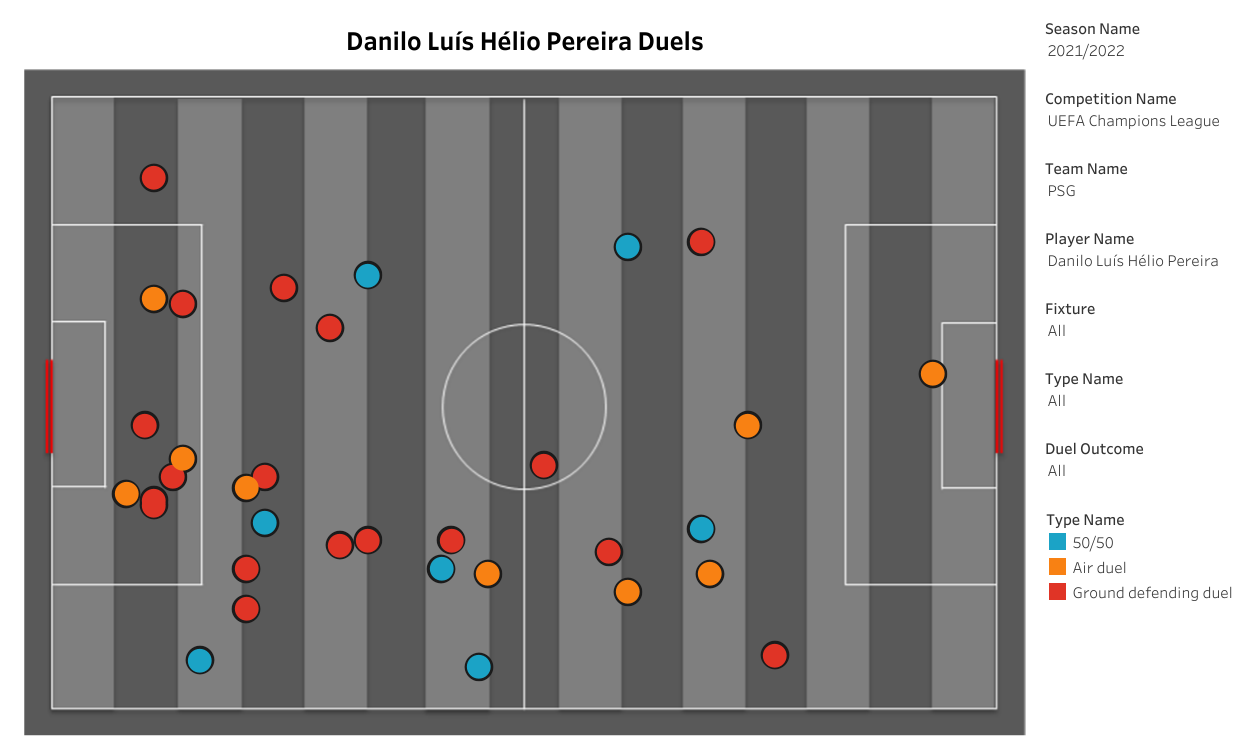 Danilo is an excellent defensive midfielder. His timing and sense of danger allow him to limit the opposition’s attacks, but he is also capable of last-ditch interceptions. The above visual shows us that he has attempted several duels in the defensive third and has won most of his duels. He has attempted more ground and aerial duels inside the penalty area. Due to his massive physique, Danilo can outpower most of his opponents and win possession of the ball.

One of the main concerns for PSG this season has been that there are not enough creative outlets in the midfield to help their front three. They are over-reliant on Messi and Neymar to be the creators, while their midfield only does the job of winning possession back. If Danilo switches back to the centre-half position, this might give a chance to players like Julian Draxler to feature in the midfield as an attacking midfielder and help out his attackers.