Achraf Hakimi arrived last June from Inter Milan for a transfer fee of £60 million. Hakimi was awarded an opportunity to join La Fábrica, the world-renowned Real Madrid player development center, when he was just an eight-year-old.

After playing for 10 years in the youth system, he was eventually promoted to the reserves. However, when his performances with the pre-season team were analyzed, he was quickly sent to Castilla. Hakimi moved to Dortmund on loan from Real Madrid. Hakimi’s loan spell came to an end with Dortmund at the start of the 2020 season, and talks regarding his future began. His performances for Dortmund put elite European teams on notice. However, it was Inter Milan who emerged as winners and bought the right wingback for €40m.

PSG needed a right-back. Alessandro Florenzi was loaned in from Roma for 2020-21, while Colin Dagba and Thilo Kehrer, centre-backs by trade, are Mauricio Pochettino’s other options.

The Moroccan has been sensational for the club since signing in a £60m move from Inter Milan this summer. Hakimi, formerly of Real Madrid, shone at both Borussia Dortmund and Inter playing as a wing-back in a three-at-the-back system.

It was a high price tag for the young player, but he did prove his doubters wrong by the end of the season. In 37 starts for Internazionale, Hakimi scored seven times and assisted eight times, impressive numbers for a defender. Inter Milan went on to win the Serie A the same season, increasing the stocks of Achraf Hakimi’s stocks. 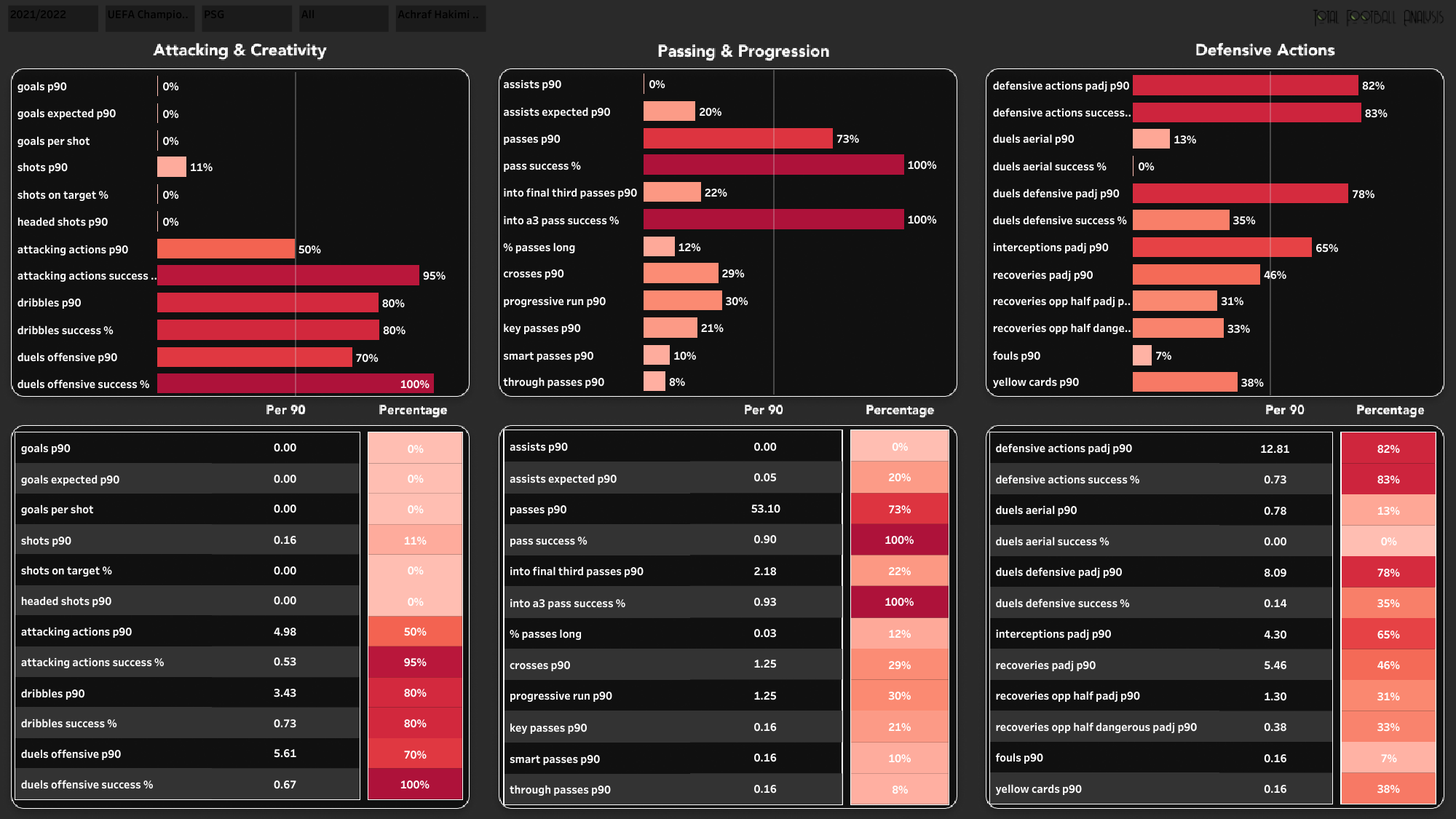 The above visual shows us the various metrics for Hakimi, which includes attacking as well as defensive stats. Hakimi has a total of six goal contributions so far in the season, with three goals and three assists. The visual indicates that Hakimi has a high success rate in completing the attacking actions he attempts. He has attempted 4.98 attacking actions per 90 minutes and has completed 53% of these actions. He also had a pass success rate of 90% in most of his games.

Hakimi is more renowned for his attacking style but helped Inter to eight clean sheets in total. Hakimi’s ball-carrying ability is another major facet of his play. His blistering pace also brought out the attacking attributes in his game. Hakimi soon transformed from a traditional right-sided defender to a modern-day right-wingback. Hakimi’s preference to play as a wing-back means PSG might have to switch to a system that incorporates such a role to get the best out of him. 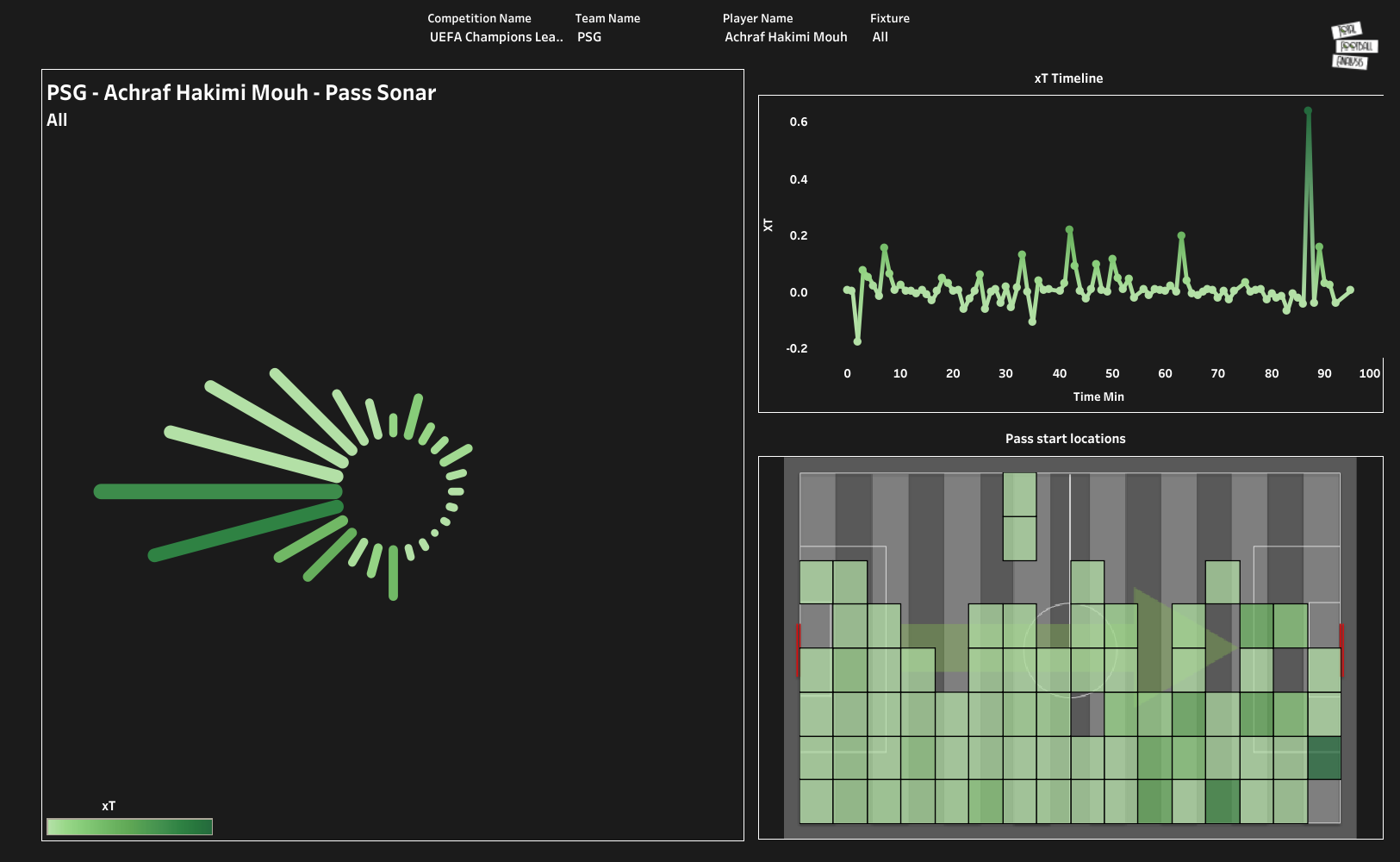 The above visual shows us the passing sonar for Hakimi as well as the xT creation locations from his passes. The sonar indicates that Hakimi has a high xT from the passes he attempts towards the left as he plays in the right-back position. He likes playing higher up the pitch and gets into great positions to put in a cross when he is in the final third. 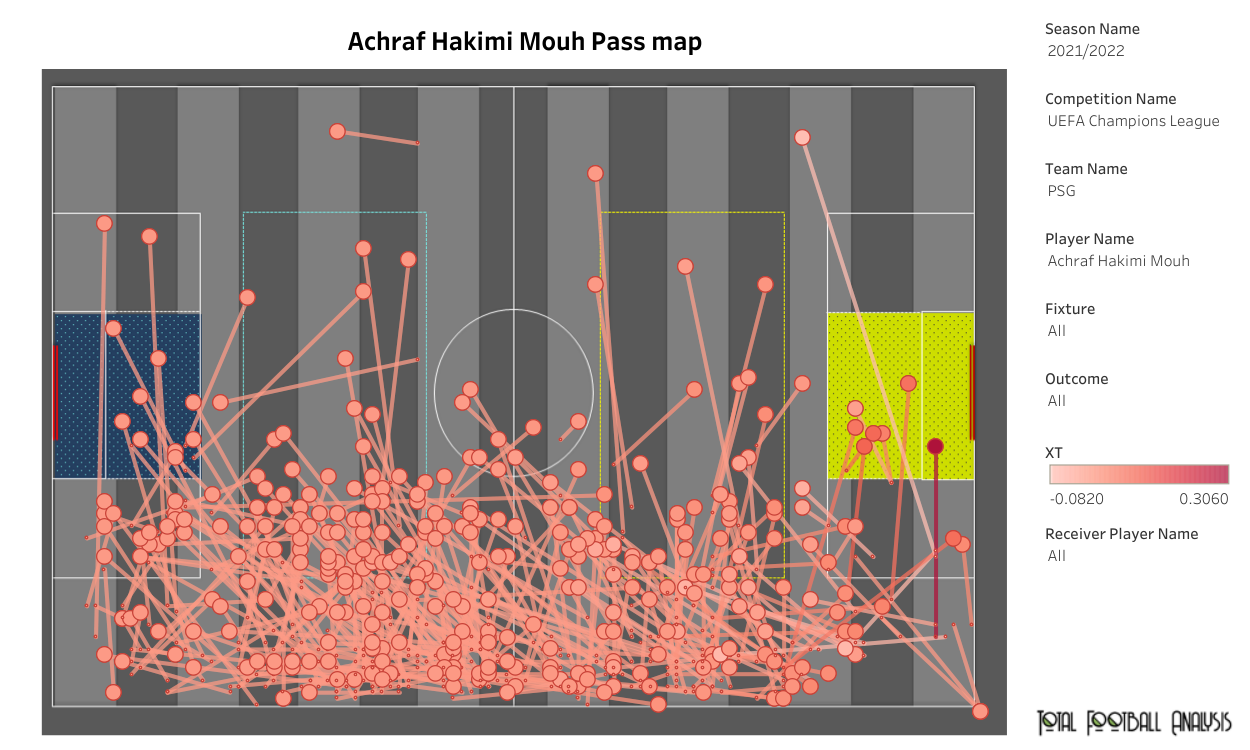 His pass map indicates that he has played a wide range of passes on the pitch. He can play short passes when his team is maintaining possession and can also switch the flank by playing balls across the field. He has not provided an assist so far in the Champions League, but with players like Messi, Mbappe, and Neymar ahead of him, it can be said that he will get his first assist in the Champions League soon. He will be facing his boyhood club in the knockout stages of the tournament and will look to put up an impressive performance against them.

Hakimi has the first touch of an attacking midfielder and the clinical finishing of a seasoned striker. He also has the pace to track back and fill the space he leaves behind on defense. Much is said about the quality of Liverpool FC’s Trent Alexander-Arnold, and rightfully so, but Hakimi is right there with him as one of the best full-backs in the game.

At the age of just 22, Hakimi has already plied trade for some of the heavyweights in world football. He has already seen around €110 million spent on securing his services by different clubs. It is high time now that the Moroccan proves his worth to the club that has paid big money to acquire him by displaying great performances.